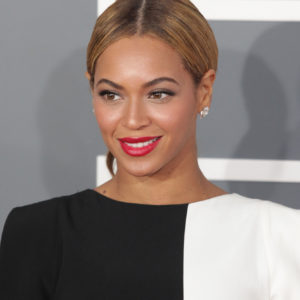 Say whaaaat! Wait a minute, did we just say …

Yes, according to a celebrity political poll conducted by “Morning Consult,” a data/analytics-driven internet publication, Beyonce statistically was rated as the most politically divisive entertainer mentioned on the “Forbes 100” list. The names used for the “Morning Consult” poll were culled from Forbes magazine, which annually ranks the wealthiest and most talked about celebrities.

The survey, released last week, was conducted Sept. 5-9 and featured 6,609 U.S. adult respondents. It revealed that Democrats fostered a net plus-63 favorability quotient for Beyonce and Republicans’ favorability for her was a net minus-3. That’s a gap of 66 percentage points, which led the Polarization Poll.

A total of 25 celebrities were listed with actor George Clooney at No. 10 with 36 percentage points, NBA superstar Stephen Curry at No. 15 with 32, rapper Kendrick Lamar at No. 20 with 29 and NBA star Kyrie Irving, rapper The Weeknd and actor-comedian Kevin Hart tied at No. 25 with 27.

Why are Democrats and Republicans mired in such a deep schism on the pop-culture meter?

“I think it really comes down to perception and speech outside of their area of entertainment,” said Matthew Donahue, who specializes in music and popular culture in the School of Cultural and Critical Studies at Bowling Green State University in Ohio. “Having one political song on an album, having one political video on your YouTube channel does not warrant the badge of ‘activist.’’’

That’s why the Polarization Factor involving Beyonce likely is moreso about her symbolic gestures and not just the music itself. Remember, during halftime of the Super Bowl on Feb. 7, 2016, she and her dance troupe dressed in a motif that was evocative of the Black Panthers, the radical activist group from the 1960s. Beyonce, wearing only a black bodysuit and stockings, even donned bandoliers across her torso; her dancers displayed black berets. All of this put CBS in the Beyonce Maelstrom.

And she has been the subject of criticism from former Arkansas Gov. Mike Huckabee, a Republican who blurted in his book that her music was too hyper-sexualized for adolescents, to black feminist bell hooks (lowercase letters by design), who stated in an essay two years ago that Beyonce’s “construction of feminism cannot be trusted.”

Now, combine all of these controversies with Beyonce’s appearance at a 2016 presidential campaign rally in support of Hillary Clinton, who knows a thing or two about polarization.

“On the Democratic side, my guess is that she (Beyonce) is popular with Democrats because Democrats are more likely to be younger, more urban and non-white,” said Kevin Wallsten, associate professor of political science at California State University at Long Beach.

“On the Republican side, the inverse of all of this is true. The tribal nature that politics have taken on also means that activism for the other side will inevitably hurt an entertainer’s popularity with roughly half the country.”

Perhaps the most peculiar compilation of the “Morning Consult” survey is celebrities on the “Forbes 100” list who were more favored by Republicans than Democrats. The top two, respectively, were Garth Brooks (with net plus-69) and Luke Bryan (61), both country-music stars. So, that’s not surprising.

Talk-show host and comedian Steve Harvey was third at 58. Harvey’s mention isn’t totally unexpected since he’s had much-publicized meetings at Trump Tower with Donald Trump, who, of course, can be divisive.

Now, strangely or not, No. 5 on that list is NFL quarterback Drew Brees (net plus-47) of the New Orleans Saints. And No. 8 is quarterback Matt Ryan (net plus-32) of the Atlanta Falcons.

“In this context, I think of the meaning of the football celebrities: wealthy and white and ascended to the heights of success allegedly through a pure meritocracy,” said David Jackson, professor of political science at Bowling Green State. “What’s more Republican than that? Therefore it is not surprising that Republicans would identify with these men.

These quarterback traits appear similar to those of actors Dwayne Johnson, Will Smith and Jackie Chan, all men of color who were the most popular celebrities overall and have largely abstained from entering into the world of Social Justice Warriors.

Furthermore, for the QBs, perhaps geography and the Electoral College play a role. Note that Ryan and Brees both play football in key southern states — Georgia (16 electoral votes) and Louisiana (8), respectively. Trump won Louisiana by 20 percentage points and Georgia by 6 in the 2016 presidential election.

With that, political polarization seemingly has become a nagging interloper that infiltrates just about every part of our daily lives. For example, take television shows, which can serve as one of the many socio-cultural markers.

Studies have shown that Republicans tend to gravitate toward TV programs that are pro-family with clearly defined plots and feature a basic theme of “good vs. evil.”

Conversely, Democrats tend to favor sexy and edgy programming, steep in emotional involvement and with ethnically diverse characters. (Just read the new book, “Prius or Pickup? How the Answers to Four Simple Questions Explain America’s Great Divide,” by Jonathan Weiler, a professor of global studies at the University of North Carolina at Chapel Hill.)

Said Wallsten of Cal State-Long Beach, “As our country becomes more polarized and as politics increasingly creeps into every aspect of life, you can expect more divides like the ones suggested above to emerge.”