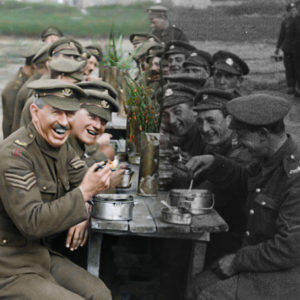 ‘They Shall Not Grow Old’ — Restoring the Battlefield, Not the Film

World War I lives today only in the childhood memories of a few centenarians. The rest of us must remember it vicariously. With his recent documentary, “They Shall Not Grow Old,” director Peter Jackson makes that possible as never before.

For those of us born in the decade after World War II, that later war was terrifying, exhilarating and endlessly fascinating — partly because of the riveting film footage. In contrast, New York Times columnist Russell Baker, born a few years after WWI, wrote in 1981 that, “To children of the 1930s, World War I, though it had ended only 15 or 20 years earlier, already belonged to ancient history. I marveled that my parents had been alive when it was fought. It made them seem very, very old.” Its photos, he wrote, seemed “blurred and lifeless,” its uniforms “almost comically quaint,” its airplanes “antediluvian.”

WWI-era motion picture technology helped distort the perception of a war that killed 16 million human beings. For the first time, distant civilians could see battlefields as moving imagery, but those same images gave the slaughter a comic-opera mien.

Those films are jerky, gray, scratchy and silent. Jackson said combatants were “trapped in a Charlie Chaplin world.” With only 12 or so frames a second (versus today’s 24), soldiers march in an awkward, rapid-fire manner that recalls mid-1980s Super Mario Bros. animation. Slow the film down, and soldiers bounce surreally like Buzz Aldrin on the moon.

Jackson alters the viewing experience via 21st-century technology. Meticulously researched color bathes soldiers, equipment and landscape. (One reviewer found it startling to recall that battlefield skies were blue.) Flashes, scratches and distortions of aging film disappear. Contrast and detail return to under- and overexposed segments.

Mid-century recordings of WWI veterans gently narrate the relentless story arc over constant background noise of gunfire and explosions. (When the artillery falls silent at Armistice, viewers realize how numbed they had become to the din.) This, in turn, is layered over the sounds of men talking and going about their daily routines. Sometimes, the voices sync perfectly with moving lips onscreen. Lip-readers analyzed what the soldiers were saying, and accent-appropriate actors dubbed the long-still voices — just often enough to persuade viewers to forget that these are silent films.

The greatest technical achievement is restoring natural motion. Jackson’s technicians interposed software-manufactured frames between the originals to bring the film up to 24 frames per second. Viewers are free to contemplate the men rather than the medium.

But this technology raises ethical questions. Is this falsifying history and doing disservice to the original filmmakers?

In the 1980s, Ted Turner colorized venerable black-and-white films like “Casablanca.” Critic Roger Ebert voiced the dominant reaction: “Anyone who can accept the idea of the colorization of black and white films has bad taste. The issue involved is so clear, and the artistic sin of colorization is so fundamentally wrong, that colorization provides a pass-fail examination. If you ‘like’ colorized movies, it is doubtful that you know why movies are made, or why you watch them.”

In narration accompanying “They Shall Not Grow Old,” Jackson notes the impropriety of colorizing films where directors deliberately chose black-and-white over color film. (Think of 2018’s “Roma” or 2011’s “The Artist.”) WWI cinematographers, he speculates, would gladly have exchanged black-and-white for color.

Perhaps Charlie Chaplin, too, would have used color film, had it been available. But it would still be abominable to colorize “The Little Tramp” today. Chaplin forged his art with the materials of his time. Michelangelo didn’t have access to acrylic paint, but that’s no excuse for colorizing “David.”

But WWI film footage isn’t primarily art. In observing “David” or “The Little Tramp,” we strive to see the works through the artist’s eyes. While, it’s interesting to view WWI footage through the eyes of the filmmakers, most of us likely aim to see through the eyes of those who, in John McCrae’s (slightly edited) words, “lived, felt dawn, saw sunset glow, loved and were loved, and now lie in Flanders fields.”

Jackson restored the battlefield, not the battlefield photography. Doing so breathed life into the long-gone soldiers — life their loved ones could never experience in the flickering theaters of a century ago.