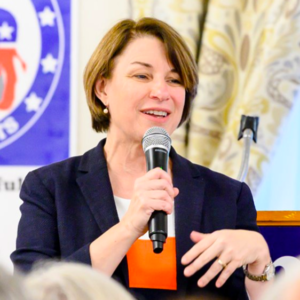 This Antitrust Bill Was Written for Industry

It’s been clear for months now that major changes would be needed to tech antitrust legislation if it was ever going to stand a shot on the Senate floor. Democrats on the Senate Judiciary Committee called for changes. Democrats off committee called for changes. Even the bill’s primary Republican sponsor, Sen. Chuck Grassley of Iowa, said that major work was needed to garner the 60 votes necessary to overcome a filibuster.

What comes as a surprise is that the latest version of the bill — introduced by Democratic Sen. Amy Klobuchar of Minnesota — does little to address any of the top concerns raised by her own party. It’s biggest beneficiary? Banking, credit card and broadband companies.

It was January when Democrats hosted a markup of Klobuchar’s tech antitrust legislation. Patrick Leahy of Vermont brought up privacy concerns; Alex Padilla of California raised questions about content moderation; Chris Coons of Delaware pointed to national security risks; and Dianne Feinstein of California argued that the bill took aim at specific companies rather than bad practices.

Klobuchar promised to work with each of them to make sure these issues were addressed in the next version of the legislation.

But with the release of the latest version, the American Innovation and Choice Online Act, what’s become clear is that Klobuchar hasn’t aimed to get the full support of the Democratic Caucus or to tackle the problems raised in committee. Instead, the changes reflect a growing commitment to garnering Republican votes by adding carve-outs that benefit conservatives’ favorite pet industries. Meanwhile, Democratic concerns are left unaddressed.

First, there’s the issue that Klobuchar’s legislation would endanger consumer privacy and cybersecurity, a concern raised by Leahy and Coons before the Judiciary Committee. By mandating third-party businesses have the right to connect and operate on an online platform, the bill effectively blocks tech companies from scanning or blocking malicious code or discriminating against harmful software.

But while the latest version of Klobuchar’s bill includes a nod to cybersecurity protections and recognizes threats from foreign rivals, it still ignores the risks from everyday hackers, data brokers and new foreign groups that haven’t been identified by the government. The updated text of the bill does not change the requirement that platforms give all business users access to hardware, software and sensitive user data — sections that the Center for Democracy & Technology flagged as having the “potential to create significant risks.”

Second, the concerns that the earlier bill raised by limiting online platforms’ ability to moderate content are left unaddressed. During the markup, multiple public interest groups submitted letters to the Senate raising red flags that Klobuchar’s legislation would prevent online platforms from taking down harmful content by prohibiting them from discriminating between similarly situated businesses.

As the Judiciary Committee considered the legislation, Padilla pointed out that the bill would have effectively blocked Apple and Google from taking Parler out of their app store for spreading election misinformation after the Jan. 6 insurrection.

It’s been months since that hearing, but no changes have been made to ensure that online platforms are able to take down harmful content. Instead, the bulk of the bill’s changes are focused on one thing: exempting credit, banking and telecommunications companies to sway Republican votes.

The latest version of the bill explicitly excludes telecommunications companies from its scope, a massive win for telcos and their Republican allies.

Similar changes were made for the banking and credit card industries. While previous versions of the legislation included “companies facilitating payments,” the new bill removes that language.

While Klobuchar continues to lament the influence of industry lobbyists, the latest version of her antitrust legislation was written for them, carving out big victories for industry titans who dominate multiple markets. Just think of the biggest mergers of the past decade. Companies like Comcast, AT&T and T-Mobile drove those mergers.

While it might be surprising to some that Klobuchar has used the latest version of her bill to gain industry support, the biggest shock is that the Minnesota senator has telegraphed her strategy for passing an antitrust bill: forget moderate Democrats and court the far right.

While Majority Leader Chuck Schumer is usually loath to schedule votes on legislation with substantial opposition within his own party, Klobuchar’s strategy may test his limits, as well as those of Democratic voters.

Adam Kovacevich is CEO and Founder of the Chamber of Progress (progresschamber.org), a new center-left tech industry policy coalition promoting technology's progressive future. He wrote this for InsideSources.com.