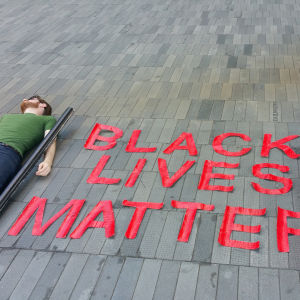 Protestors lay motionless on the pavement outside of Brooklyn's Barclays Center, marking the one-year anniversary of the shooting death of Michael Brown, Sunday, Aug 9, 2015, in New York. Demonstrators maintained their silence for a few moments before rising and joining others, including some marching from the Barclays Center arena into Manhattan for another rally later in the day. Among those marching were a dozen people carrying a giant banner reading, "Black Lives Matter." (AP Photo/Verena Dobnik)
News

Jordan Richardson isn’t one of them. He’s a policy analyst at the young conservatives group Generation Opportunity, and on Friday he told InsideSources that Black Lives Matter is contributing to an important national conversation on criminal justice reform.

“I don’t label them a hate group. They’re highlighting issues,” Richardson said in a phone interview.

The analyst argued that the need to reduce the incarceration rate — a key priority of Black Lives Matter — shouldn’t be a liberal or conservative issue so much as a straightforward question of morality:

Are we doing the right thing by sentencing so many people to prison with little help for redemption once they get out? … It’s harder for them to get a job because they’ve got a target painted on their resume. It’s harder for them to go to college, get a loan, start a business. The more people you put in prison and label criminal, the more people who come back to society and go through the revolving door of committing the same crimes over and over.

Richardson also made the case that conservatives should embrace criminal justice reform from a public safety standpoint, given that “research has consistently shown that high incarceration rates are not providing the public safety that we need.”

“I will give credit to President Obama,” he said. “He’s made this a big part of his presidency, talking about this issue. He was the first president to visit a federal prison, and I think his efforts have been instrumental.”

Generation Opportunity’s position isn’t entirely surprising, considering its funding has been linked to the Koch brothers, who have become unlikely Obama allies on this issue. As the Wall Street Journal reported, “the Democratic White House and the high-dollar Republican donors have teamed up to push for a rewrite of federal sentencing laws and other changes.”

That’s not to say that conservative candidates are likely to have many kind things to say about Black Lives Matter ahead of the 2016 election. The Guardian reported that “at least two Republicans [running for president], Scott Walker and Ted Cruz, have cited the group as evidence of a new anti-police ‘culture’ – created by President Barack Obama, they say – that has endangered the lives of law enforcement officers.”