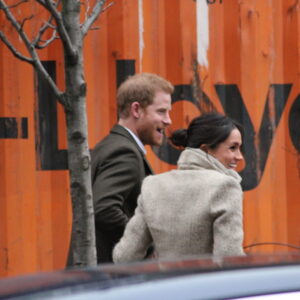 With some time to reflect during this frenzied aftermath following Oprah Winfrey’s drama-dripping patio confab, what have we learned:

A.) Viewers in the United States watched the CBS telecast numbers-wise as if it were an NFL game,

B.) Oprah, Prince Harry and Meghan Markle can affect the stock market,

Also, internationally, television host Piers Morgan surely knows how to create major disruptions. First, he bashes Meghan relentlessly, then walks off the set of his own show, “Good Morning, Britain,” after getting into a heated quarrel with fellow colleague, meteorologist Alex Beresford. Morgan’s theatrics on the set ended with his resignation.

According to a flash poll of 2,104 adults by YouGov shortly after Oprah’s interview, sympathy for Meghan by Black folk was profound in the United States. That’s to be expected, especially since she is classified as a person of color. The responses revealed that 72 percent of Black Americans polled related that race played a role in the treatment of Meghan by the Royals.

As former First Lady Michelle Obama told co-host Jenna Bush Hager the other day on NBC’s “Today” show, “Race isn’t a new construct in this world for people of color, so it wasn’t a complete surprise to hear (Meghan’s) feelings and to have them articulated.”

Also, 76 percent of Black folk responded that race was a major factor in Meghan’s treatment by the British media.

To Obama’s point, Meghan assuredly endeared herself to Black people because she went public in discussing racial issues, something she undoubtedly could have sidestepped.

Yes, Meghan went there in a key moment for many Black Americans. And the support clearly followed.

However, some U.S. enclaves unabashedly professed anti-Meghan sentiments, starting with an often partisan media. Just notice the two most polar opposite cable news networks on television these days — MSNBC and FOX News Channel.

MSNBC’s mostly-liberal talking heads painted Meghan as a victim of staunch racial animus, a damsel in distress, a Duchess in Despair  — and added the caveat, “So, didn’t you expect those stuffy Royals to mistreat Meghan.”

Bottom Line from the liberal corner: Harry-Meghan wanted to sincerely express their pain and heartbreak that emanated from much family discord and an overzealous British media.

FOX’s mostly-conservative commentators characterized Meghan as a whiner, opportunist, gold digger, and poor representative for young ladies during March’s Women’s History Month — and added the caveat, “So, what did you expect from a woman who is an actress by trade.”

Bottom Line: Harry-Meghan wanted to use CBS as a two-hour infomercial to promote their multi-million dollar content deals with Spotify and Netflix.

Some even compared Meghan to Yoko Ono. You remember her; she was labeled the interloper who became John Lennon’s love interest and has been blamed — rightly or wrongly — most of 50 years for breaking up The Beatles; comparatively, Meghan has been targeted as the one who maliciously roils the Royals (just ask the volatile Piers Morgan).

Any similarities, for real?

“The only parallel is the perception,” Bruce Spizer, an attorney and Beatles historian from New Orleans who has written 12 books on the Fab Four, told InsideSources. “In a new situation, it’s always easy to blame the newcomer. It’s an oversimplification to put the blame on any one individual.”

Still, the data analytics reflect the public’s interest in listening to The Triumvirate discuss who did what to whom and why and how — in multiple categories from individual feelings about Royal status to racial sensitivities to brother-to-brother battles between two princes, Harry and William, to duchess-to-duchess dust-ups between Meghan and Kate Middleton.

—The assortment of patio furniture used in Oprah’s outdoor interview sold out within 48 hours after the broadcast. Which should make “Peter Brady” happy. We remember him as the middle son on the hit family TV show, “The Brady Bunch,” from 1969-1974. In 2021, he’s Christopher Knight who is head of Christopher Knight Brands, which features his designer collection of home-furnishing supplies (check Amazon, Target, and Overstock).

—The early television ratings (within the first 72 hours) showed a viewership of 17.8 million, a Royal Flush, indeed. That’s the equivalent of an average NFL game in 2020, which is lofty considering pro football weekly maintains the highest viewership of any TV programming. Worldwide, the tally was at least 50 million. Oprah’s interview also garnered more viewers than the 2021 Grammy Awards (9.2 million) and Golden Globes (6.9 million) combined.

—Winfrey and her production company HARPO (that’s Oprah spelled backward) consummated a reported $7 to $9 million deal with CBS for her services. And CBS, which doubled its normal advertising rates for that 8 p.m. Eastern time slot to a reported $325,000 per 30-second commercial, recouped an estimated $20 million.

—On the Wall Street scene, shares of ViacomCBS stock increased 12.7 percent on that Monday, March 8, the morning after the interview. Its $83.66 per share marked the highest price since CBS and Viacom merged in 2019.

So, is Prince Harry the new John Lennon?

“Oh, no, I wouldn’t go that far,” Spizer explained. But . . .  “Prince Harry, by his own personality, just like John Lennon, is a very independent person.”

We’ve seen how personality-conflict journalism sells these days, as the Royal telecast ranked in the Top 20 of the most-watched prime-time interviews in history.

And look who benefited big time . . .

From Wall Street to “Peter Brady” to CBS to Oprah Winfrey.