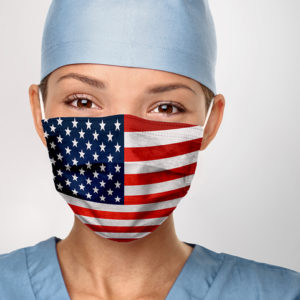 When a nation goes to war its first step to survival is to protect the homeland against invasion. Every citizen is co-opted: It is their national duty.

We are on a war footing against COVID-19. It has invaded our homeland, and it is slaughtering us. Nearly 300,000 are dead and the vast hospital network in the United States is overwhelmed.

A dark cloud passes before our sun. Christmas promises more sorrow as we wait for reinforcements — in this case, the vaccine — to arrive.

The first line of defense against this common enemy, this indiscriminate killer, is a simple piece of layered cloth or paper held over the nose and mouth by cloth or elastic strings. It is a face mask, the simplest of defensive weapons.

But there is in the United States a tribe that has lost its head, reminiscent of Nicholas Monserrat’s great novel of 1956.

Worse, there are those who believe it is a political statement of solidarity with the outgoing administration, with the embattled president, and the raucous nationalism that is the core of his appeal.

Some won’t wear masks out of youthful chutzpah, believing this is a disease of the old and that the young and the healthy are immune.

This is a fiction they have been fed by those who should know better and most likely do know better, most of whom reside under Republican roofs, presided over by that Niagara Falls of disinformation, President Donald Trump.

While the nation is taking fatal casualties which it doesn’t need to take, while first responders and medical personal are thrown again and again into the breach, exhausted and scared, the Trump Republicans can’t bring themselves to join the battle.

While the signs of war — a war with a terrible count in deaths — rages on, congressional Republicans are foraging for scandals like pigs after truffles. Most of them still won’t condemn Trump for his super-spreader activities, like his rallies, parties and reckless behavior in public, which signal masks aren’t needed.

The trouble is that leaders of this headless tribe, this unacceptable face of what was the Grand Old Party, are so cowed that they won’t check the president.

The Republican Party used to be made up of muscular individuals, lawmakers who took their mandate seriously, not today’s pusillanimous followers.

Incredibly, most Republican members of Congress can’t bring themselves to admit that Joe Biden won the election and will be the next president. Had there been “massive voter fraud” this wouldn’t be so. The courts would have spoken other than as they have.

All of this has played into the anti-mask movement and its lethal consequences. The virus doesn’t ask party affiliation: It is an equal-opportunity slayer.

Then there is Trump’s great enabler in the Senate, Majority Leader Mitch McConnell.

Even as millions of Americans don’t know where the next meal will come from this Christmas besides a food bank, and rent and utility bills are unpaid, McConnell, and McConnell alone, will decide who gets relief, who gets the shaft for Christmas. He can just refuse to bring a bill to the floor and end it right there. His personal concerns are paramount, not those of the other members of Congress.

Not only does McConnell not wish to understand the gravity of the situation in the country, but he also seems to relish his ability to exacerbate it, to turn his job into a Lego game for his own amusement.

This will be a bleak Christmas lit by the hope that the vaccine will deliver us from despair and bottomless hurt.

But for the vaccine to vanquish the virus, we must get our shots. If the same idiocy that shuns masks prevails, the war won’t fully be won for years when it could be ended next year.

The sight of victory is the best Christmas present, and it is possible next year if we close ranks. Those who will bear the guilt are known. They are in Washington now.