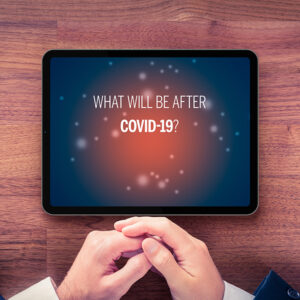 Thoughts at the Waning of COVID

COVID-19 could be the first pandemic in human history to increase rather than decrease humanity’s total weight—a conjecture put forth to me by my colleague, David Masci. You’ll have to ask a demographer or an epidemiologist (or both) whether it’s true. But it’s intriguing.

If you put all 7.9 billion of us on a really large bathroom scale, my guess is that we’d weigh in at around 400 million tons. There are at least four ways that a pandemic reduces that total weight: (1) If a 200-pound man dies, mankind’s weight declines by 200 pounds. (2) If a 130-pound woman loses 20 pounds while hospitalized, that’s a 20-pound loss. (3) Widespread illness can disrupt the production and distribution of food, so people go hungry. (4) Loss of income can lead people to tighten their belts—literally and figuratively. But this is the 21st century when new technologies moderated all four effects—and introduced some weight-increasing elements.

The internet and broadband enabled many (including me) to work from home and suffer little income loss; for us fortunate ones, there was no need to reduce food consumption. We could stock our pantries and refrigerators while social distancing thanks to Amazon, FedEx, InstaCart, and other e-commerce companies. That ability to maintain social distance while still eating slowed the spread of the virus, thereby reducing the number who lost weight due to illness or who were swept out of mankind’s weight count and into the grave. Telehealth meant doctors could continue treating patients while both remained in isolation. Pfizer, Moderna, and Johnson & Johnson rolled out revolutionary new vaccines with astonishing speed. In turn, fewer sick and dying meant less disruption of food supplies and distribution and less economic downturn.

And, perhaps unprecedented in the history of plagues, the pandemic incentivized weight gain among vast numbers of us. Pre-pandemic, I worked in an office building with no tempting snack machines. I swam four or five times a week and walked a great deal. During the pandemic, the pool closed. I stayed home, awaiting deliveries of every consumable, and rarely found myself more than 20 feet from a well-stocked refrigerator. Another colleague said he added his “COVID 19”—the extra weight he sees on the bathroom scale. (For those interested, my pool is back open, I purchased a highly entertaining elliptical machine, and gathered my resistance to the siren calls of fridge and pantry.)

Again, I can’t swear that mankind’s total weight increased during a terrifying global pandemic. But the possibility is a testament to the technologies that eased the pain of this plague. Yet, here come the maddening, predictable calls to punish those whose technologies saved the day.

I’m not certain the pandemic has ended, but circumstances certainly look promising. Technologies—internet, broadband, telehealth, e-commerce, resilient supply chains, vaccines—likely saved humanity from a fate far worse than what we actually endured over the past 18 months.

And yet, there are those who would punish the creators who made these things possible. Many complain about tech giants, such as Amazon’s Jeff Bezos, who made billions during the pandemic. Perhaps even more mind-bending are complaints about “excessive” profits earned by vaccine developers. The current U.S. Trade Representative, Katherine Tai, said. “The [Biden] administration believes strongly in intellectual property protections, but in service of ending this pandemic, supports the waiver of those protections for COVID-19 vaccines.”

That’s an excellent strategy for diminishing the chance of a successful vaccine for the next pandemic that comes our way. Companies that successfully developed vaccines—and others who tried and failed—spent billions in high-stakes rolls of the dice. If you change the rules after the fact in this way, you send a powerful message to future drug developers that it may not be worth their while to bother.

I fully agree that tech giants can be annoying and arrogant. But in this situation, I’m thrilled that their wealth piled up. Whether it’s Amazon or InstaCart or Zoom or Netflix or Pfizer, they did a great deal to save the day and minimize the pandemic’s damage. I want their success and their earnings on the minds of every future innovator from now till the next crisis blows our way.