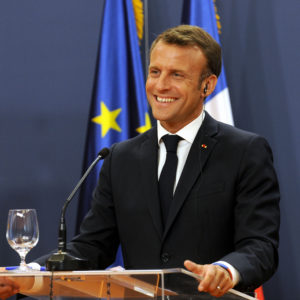 No one lauds Russian President Vladimir Putin for his warmth, compassion, or love of democracy. He has used cyberattacks to meddle in U.S. elections and interfere with Ukraine’s internal affairs. He invaded Georgia in 2008 after a Georgian provocation and Crimea in 2014. He has continued to assist separatists in a civil war after Ukraine’s government failed to give promised autonomy to Ukraine’s eastern Russian-speaking regions. Now he has assembled 130,000 troops poised to invade the bulk of Ukraine that is left.

Thus, many have criticized Emmanuel Macron, the French president, for going to Moscow to negotiate with the Russian autocrat in an attempt to prevent any sort of Russian invasion or incursion into Ukraine. He has been pilloried for letting Putin symbolically hold him at a distance during their meeting at perhaps the longest table ever built and, prior to the meeting, saying that the “Finlandization” of Ukraine was a model that was on the table. Also, some have criticized Macron for acting independently when Western unity is needed, in an attempt to grandstand as the leader of Europe before his imminent re-election effort in France.

Yet Macron is the good cop in the West’s good cop-bad cop response to Putin’s threatening moves. President Joe Biden, as leader of the NATO alliance, is the bad cop and has so far played his limited hand about as well as he could, given the bungling of his American predecessors in expanding the alliance up to Russia’s borders. Biden is right not to negotiate, with a symbolic gun to his head, a public pledge to Russia never to take Ukraine into NATO and to remove forces and weapons from Eastern Europe.

However, in exchange for Russian de-escalation and withdrawal of troops from Ukraine’s borders, Biden should negotiate with Putin on the larger issues of European security, not just over the U.S. arms control proposals that do not satisfy legitimate larger Russian security needs. Of course, Macron said the quiet part out loud—that the “Finlandization” of Ukraine is a possible solution. In fact, it is the best solution. During the Cold War, Finland was able to keep its prosperous democracy, even though it shared a border with the Soviet superpower, by remaining neutral and accepting guidance from the USSR on its foreign policy.

Similarly, the Biden administration needs to privately tell Ukraine–which historically has been strategically, economically, and culturally important to neighboring Russia—that although NATO publicly still would hold the door open for NATO membership, that outcome would never happen in practice and that “Finlandization” was the best option for weak states in the spheres of influence of great powers. Thus, the West could offer economic relations if Ukraine itself decided to publicly withdraw its interest in alliance membership.

Macron is also correct that by not addressing Russian security concerns, the West is driving Russia into the arms of China. Putin and the Chinese leader Xi Jinping recently declared at the Beijing Olympics that the United States should “abandon its ideologized Cold War approaches” and that the two countries had “no limits” to their friendship. Bruno Le Maire, the French economy minister and close ally of Macron, trenchantly asked, “Do we want a Russia that is totally aligned with China or one that is somewhere between China and Europe?” Macron even seems to be willing to integrate Russia into some sort of new European security system. Since World War II, France has always wanted to be allied with the United States but have some independence. It seems difficult for France to have it both ways unless the United States and the rest of NATO countries would be willing to remove the Article 5 collective defense requirement from the NATO treaty and admit both Russia and Ukraine to what would become a political organization to discuss European issues and problems. If this better route would have been followed after the Cold War ended and the Soviet Union collapsed, the current crisis over Ukraine probably would not be happening.

Even if Macron’s long-term idea for a revamp of European security cannot be achieved quickly, he is right to negotiate with Moscow and Kiev and perhaps impress on the Ukrainians that being a democracy friendly to Russia under Finlandization is better than enduring Soviet-style authoritarian rule after a full-blown Russian invasion.