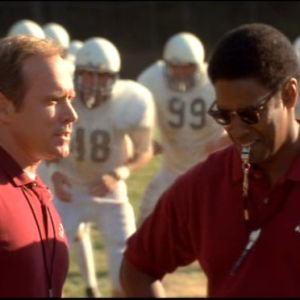 Denzel Washington and Bill Patton in Disney's Remember the Titans.
[IS] Opinions

No misprint here. It’s high school football played on Thursday nights from generations past — when the institution of legalized segregation set the rules.

Those rules are laid out for all to see in an insightful new book titled “Thursday Night Lights: The Story of Black High School Football in Texas,” by author-historian Michael Hurd. But this book is more than a treasured tome about black Texas high school players on the fast track to stardom.

Simply put, the book takes us on a journey to the intersection of segregation, sports, talent, politics and socio-economics. And even to a Turkey Day Classic, when a hot rivalry football game between all-black Texas high schools drew 40,000 fans on Thanksgiving.

Even casual football fans remember these names: Bubba Smith and Mean Joe Greene, two lofty alumni of the 1960s all-black high school league in the Lone Star State. They also became household names off the field after appearing in two of the most popular television commercials in history in the 1970s-1980s — with Smith a pitchman in a series of hilarious Miller Lite beer TV ads and Greene in a sentimental Coca-Cola commercial.

Hurd’s book traces the sociological progressions and regressions of our larger democracy. Let’s start with a history lesson. It begins with the U.S. Supreme Court’s ruling in the Plessy v. Ferguson case. The year: 1896.

In a major victory for supporters of racial segregation, the high court, by a 7-1 ruling, upheld a Louisiana law providing for “equal but separate accommodations for the white and colored races” on its railroad cars. Therefore, the Supreme Court stated, segregation didn’t violate the 14th Amendment, which granted black folk equal protection under the law.

However, that catch-phrase “separate but equal” in reality was merely a misnomer.

But that didn’t stop legalized segregation in the United States. When separate high school football leagues, based on race, were formed in Texas in the 1920s, most schools didn’t feature campus-based stadiums. So the schools played at public stadiums.

As Hurd writes in his book, “White schools had priority for the Friday-night use of public stadiums shared with black schools.”

That meant the black schools had to pick another night. Therefore, how about “Thursday Night Lights.”

The all-black high schools didn’t have the same resources and amenities as white high schools. Nor did black schools garner similar media attention — save for the black-owned press.

Common bond? They are members of the Pro Football Hall of Fame.

Hurd quotes the late Bubba Smith in his book: “There was the black side of town and the white side, and you just dealt with what was laid out there for you. You didn’t have time to think, ‘Why can’t I do that, or why is it like that?’ Sometimes I think a large part of my life was lost by that. But you could always show what you had on the football field.”

Hurd, 68 and a former sports writer for USA Today, is the director of Prairie View A&M University’s Texas Institute for the Preservation of History and Culture. He attended segregated Houston Worthing High School; one of his star classmates was Cliff Branch, who ascended to legend status with the Oakland Raiders.

Though the Plessy v. Ferguson decision was struck down by another U.S. Supreme Court ruling, in 1954 — Brown v. Board of Education — school segregation continued in many parts of the country by custom if not by law, especially in the South, including Texas.

But at the close of the 1960s, when the Dr. Martin Luther King Jr.-led Civil Rights Movement relentlessly pushed the United States toward desegregation in practice, instead of just theory, the black football league saw the beginning of the end. And King’s efforts led to the Civil Rights Act of 1964, which buttressed the court’s 9-0 ruling in Brown in 1954.

That’s why Hurd closes the book with a chapter called, “Integration: The Good, the Bad, the End.” The paradox here is that while black and white football players began to attend the same schools, which furthered Dr. King’s dream toward racial harmony, some black football coaches lost their jobs and the black schools lost their identity amid the dissolution of the black league.

What would have happened if the Brown decision never occurred?

Said Hurd, “The best and the brightest would still be contained in black neighborhoods going to those schools, cheering for those teams. It would be as it was, and that wasn’t necessarily a bad thing. In fact, a lot of the former coaches and players I talked with said they didn’t want integration, just equal opportunities and resources. They knew, with integration, the erosion of black communities would result.”

And that’s the ultimate irony in the historical transition of segregation to integration — even in football.