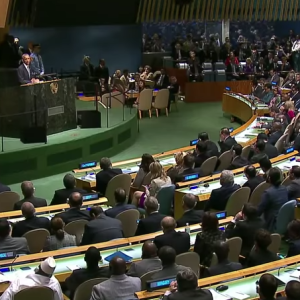 Since its inception the United Nations has spent billions of dollars in global taxpayer money pushing questionable resolutions and misguided initiatives. A recent resolution condemning Israeli settlements has prompted considerable backlash and calls to defund the organization. In light of these recent developments, the incoming Trump administration and Congress have a rare opportunity to reduce the annual $8 billion subsidy to the United Nations and push for more oversight. Attaching more strings to U.N. funding can effectively reign in an organization hostile to individual rights and sound public policy.

The latest controversy at the United Nations isn’t the only problem at this international organization. The U.N. has an abysmal record on preserving press freedom, regularly blocking access to their meetings and instigating vendettas against journalists. In the first two days of the U.N.-funded World Health Organization’s 2014 Conference of the Parties Framework Convention on Tobacco Control, a tobacco control treaty, the public was ejected and the press had their event credentials revoked.

Last year, journalist Drew Johnson was forcibly removed from the 2016 Conference of the Parties meeting in India for violating the continued ban on press presence. This hostility toward journalism perpetuates a culture of secrecy, and keeps respected press freedom groups from monitoring the organization. The U.N.’s initial decision to deny consultative status to the Committee to Protect Journalists was largely the result of opposition by South Africa, China and Russia, countries with spotty press freedom records.

Yet, when tasked with investigating crimes committed by despotic regimes, the United Nations cannot help but to draw attention away from rulers and toward journalists. Instead of maintaining focus on Syrian brass in Hague proceedings after the 2005 assassination of former Lebanese Prime Minister Rafic Hariri, the U.N. focused its firepower on Lebanese journalist Karma al-Khayat. Time and taxpayer dollars were wasted on the false indictment of al-Khayat for leaking information about witnesses that “undermined the court’s worth.” Despite her eventual acquittal, her trial has given the press second thoughts about venturing near future U.N. investigations.

While advocates of global security see the United Nations as a necessary deterrent to conflict around the globe, the majority of U.S. dollars to the organization go to non-security budget items. Initiatives such as the tobacco control treaty receive the lion’s share of the funding, and push ineffective programs that encroach on national sovereignty. The United Nations’ tobacco control regime has advocated tirelessly for greater tobacco taxation, a regressive policy that studies show has the unintended consequence of promoting less healthy products.

Additionally, U.N. policy promotions are often unworkable and devoid of priority. In the midst of a raging civil war, the World Health Organization has recently pushed the Syrian government to reduce smoking rates in its country. This is a clear indication that the United Nations is out of touch with what’s important.

Economist and British biochemist Terence Kealey notes, however, global innovation corresponds to private, not public, R&D dollars. In response to the report and panel, the State Department rightly expressed concern “that by conducting such a narrow review, the report issued by the panel may be imbalanced and of limited use, or even counterproductive in building consensus among stakeholders and national governments.”

While the United Nations was founded with the noblest of intentions, its existence has increased global suffering and bungled taxpayer dollars. The power held by autocratic regimes in the organization prevents reform and allows dictatorships to export their press-suppression methods to global proceedings. By putting the U.N. on a tighter leash, the United States can send a message that these activities have no place in a new, genuinely conservative world order.