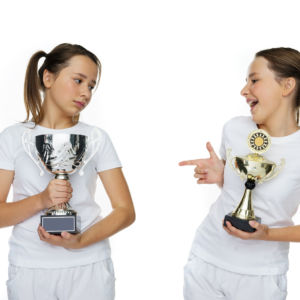 Time to Set the Record Straight on That Competition Thing

What’s next? The Super Bowl being decided by which team receives the Mr. Nice Guy Award.

Come on now. Does the Wimp Party have that much clout.

The Wake County school board in North Carolina recently voted to ban high schools from naming valedictorians and salutatorians — normally the two highest-ranking senior-class students by grade-point averages — after the 2018 graduation season.

“We have heard from many, many schools that the competition has become very unhealthy,” school board chairman Tom Benton told the Raleigh News & Observer.

No. Healthy competition forces everyone to achieve, to aspire to greater heights.

This new system apparently means no graduation speeches for the top two ranking members of the senior classes. More seniors would be recognized, said Benton, who added that the old system was unfair because the mathematical-rankings difference between the top-tier students and others often is decided by mere thousandths of a decimal point.

OK, so what? Someone has to be first, and second, and third, and fourth …

The father then asks his son for the trophy, reads the word “PARTICIPANT” on the trophy and blurts, in a deep bass voice, the “No” word about 10 times. He pulls out a black Sharpie pen, tears off the white strip with “PARTICIPANT” inscribed on it, then scribbles “CHAMPS” in bold capital letters, before handing the trophy back to his son.

It’s called setting the record straight. Good for him. It’s the best commercial on television.

James Harrison of the NFL’s Pittsburgh Steelers was life imitating art in 2015 when he returned his sons’ “Participation” trophies to their school. Harrison, an old-school linebacker in the philosophy of competition, adamantly maintained that his sons didn’t deserve an award just for showing up. As hip, young folk like to say: He got “real” on us real quick.

Harrison wrote on Instagram: “I came home to find out that my boys received two trophies for nothing, participation trophies! While I am very proud of my boys for everything they do and will encourage them till the day I die, these trophies will be given back until they EARN a real trophy. I’m sorry. I’m not sorry for believing that everything in life should be earned, and I’m not about to raise two boys to be men by making them believe that they are entitled to something just because they tried their best … ’cause sometimes your best is not enough, and that should drive you to want to do better … not cry and whine until somebody gives you something to shut u up and keep you happy. #harrisonfamilyvalues”

This rush to judgment to make everyone the same is spurious. Fraudulent. Counterfeit.

Not everyone does everything well. It’s silly at best, deleterious at worst.

Furthermore, this mad rush seems to assume that our nation’s youngsters cannot handle rejection. Just too mentally fragile, many say. Can’t handle not finishing No. 1.

That their psyche somehow will be permanently scarred. That every kid in the country will be utterly, emotionally destroyed because somebody said the word “No” to them.

Our children, teenagers and students seem much more resilient than that. If 500 kids try out for the school soccer team, don’t you think most of them know that not ALL 500 will make the squad. And don’t you think they really know, within the deep depths of their heart and soul, if they are really good enough. If they aren’t, they know to move on in life.

We should give young people more credit for understanding the art of competition. Examine the early history of NBA great Michael Jordan.

As a sophomore at Laney High School in Wilmington, N.C., Jordan tried out for his school’s varsity basketball team. He didn’t make it for two reasons: Though Jordan possessed huge hands, he was too raw and too short at only 5-foot-10, and the coach wanted height; Leroy Smith had the height at 6-7.

Thus, he made the varsity and nudged out Jordan, who was relegated to junior varsity. An embarrassed Jordan never forgot that.

That episode was never lost on Jordan, who is famously — or infamously — known to hone in on any sort of motivational force, whether real or imagined. That snub drove the rail-thin Jordan to work harder, to focus, to cultivate his game. His coach assisted Jordan with improving his skill level, he made the varsity the next season, was blessed with a growth spurt to 6-foot-6, and the rest is history.

It’s a classic case of work ethic plus focus plus talent plus poise-under-pressure plus heart meeting at the pinnacle of desired opportunity. And goal achievement. That’s what youngsters need to glean from the Michael Jordan Saga.

It’s amazing how so many interest groups and factions fomenting political correctness sternly believe young folk cannot handle even the slightest of competitions.

Hey, get over it. That’s life.