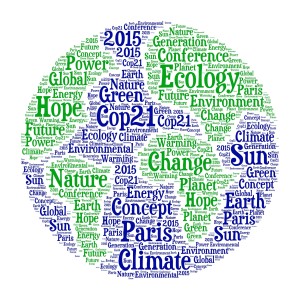 As an environmental educator, I struggle with explaining the urgency of global climate change. One way of communicating this to students, I have found, is to liken climate change to a cancer. And as the Paris climate meeting approaches we need to address this cancer.

The climate change debate often focuses on the burning of fossil fuels and the resulting rapid increase of greenhouse gases, especially carbon dioxide, in the atmosphere and ocean. What is not made clear, is that it isn’t just that we are introducing these gases, it is the rate at which we are doing so that is truly disastrous.

This is how climate change resembles a cancer. What’s dangerous about cancer isn’t the process itself — cell reproduction is normal and essential. What’s harmful with cancer is the vastly accelerated rate of cell growth. The same is true about the accelerated rate of increasing greenhouse gases.

Climate has changed before, and Earth has been warmer in the past. Fifty million years ago there were no polar ice caps and beech trees flourished on Antartica. As recently as 3.5 million years ago camels inhabited the Canadian Arctic.

Although we don’t have direct greenhouse gas measurements from those periods, we know carbon-dioxide levels were also higher millions of years ago. From Antarctic ice cores we do have direct atmospheric gas measurements of Earth’s more recent history. For the last 800,000 years, these cores reveal, atmospheric carbon-dioxide levels have varied between about 170 parts per million and 290 ppm. Atmospheric carbon dioxide rose and fell in parallel with the rising and falling temperatures that brought us ice ages and interglacial periods such as our own.

But these carbon-dioxide changes occurred over thousands, even tens of thousands of years. In the last 100 years, though, we have increased atmospheric carbon dioxide by almost as much as the difference between a glacial and interglacial atmosphere.

Cancer progresses at different rates in different patients and requires different treatments. Once diagnosed, however, aggressive measures are taken to stop the process. And the earlier treatment starts, the better the prognosis. Why aren’t we taking the same aggressive measures to limit our greenhouse gas production? Because it’s too difficult or too costly? The same might be said for cancer treatment, yet most people take the aggressive option.

Maybe we are failing to take action because just as in the early stages of cancer, the early stages of global warming aren’t too obvious. Not yet. Few people, if any, wake up one morning knowing they have cancer. There are analyses and tests to be conducted first.

We’ve already done that work with regard to our climate, we have those analyses and tests. We know that air, land and ocean temperatures are rising. The warming ocean and melting ice contribute to sea level rise. Our wait-and-see attitude makes as much sense as waiting to see if the cancer spreads before undergoing treatment. What will a few degrees of warming do to a planet? To a human body?

This is where, the analogy breaks down. The rise of greenhouse gases are not going to kill our planet like a cancer kills a human being. Over thousands of years Earth has shown a remarkable ability to adapt to climatic changes. In the process of adaptation, however, many species become extinct. Ours could join them.

The changes have already begun. Earth is warming. This is an inescapable fact of physics. Although Earth receives energy from the sun, it is when the energy is reflected back into the atmosphere and interacts with a greenhouse gas that it actually warms us. If you shoot a marble into a circle full of marbles, you have a much better chance of hitting a marble than if you are shooting at a single marble. By increasing greenhouse gases, we are in effect adding more marbles and increasing the likelihood that reflected energy will strike a greenhouse gas molecule and increase the warmth. The more molecules, the more energy, the more warmth.

Again it might not seem urgent. I find energy a difficult concept to understand and the units, Joules or calories or BTUs, are not easy to visualize. The destructive effects of energy — a hurricane, an earthquake or an explosion — are easier to grasp. So visualize this: the extra energy we are adding to the atmosphere because of the increase in greenhouse gases is equal to the energy that would be released by the explosion of four Hiroshima bombs every second.

The human toll from atomic explosions and cancer is known. Why aren’t we taking action to save human lives by reducing our fossil fuel consumption? The Paris climate negotiations and the EPA’s Clean Power Plan are important international and national steps toward this goal. We need aggressive action to counteract this climate cancer before it causes irreparable harm to humans. Time is running out.

Suzanne O’Connell is a professor in the Department of Earth & Environmental Sciences at Wesleyan University in Connecticut.