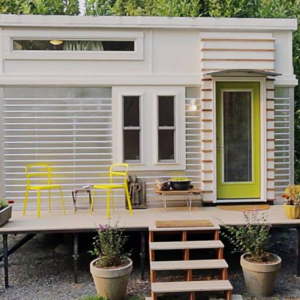 Legislation to build 1,000 “tiny houses” in the nation’s capital is being received well this week by Mayor Muriel Bowser’s administration.

But at Monday’s D.C. Council hearing on the bill, one outspoken young professional provoked back-and-forth over whether it would perpetuate income inequality.

Under the legislation, authored by at-large Council member Vincent Orange, D.C. would fund trendy miniature dwellings of as little as 600 square feet, aiming to add affordable housing to a city with a rising cost of living.

The houses, constructed by local small businesses and sold for $50,000 each, would be available to three groups of residents: those making the minimum or “living” wages of $10.50 or $12.50 an hour, plus senior citizens and millennials aged 18 to 33.

It was that last eligibility requirement that bothered Briane Cornish, a 2014 graduate of Stanford Law School who moved to D.C. for a legal fellowship in 2015. In the hearing’s tensest moments, she told Orange that making the tiny houses open to all millennials like her, with no preference for low-income people, would result in relatively affluent young Washingtonians filling them up.

In other words, Cornish told InsideSources, it would further the divide between “people going out on the weekends and having bunch and [those] living destitute and homeless.”

Orange was adamant that Cornish was wrong.

Ultimately, the Council member said he and Cornish would “agree to disagree,” since he had “a commitment to the millennials” as well as other groups. He talked about wanting to help keep native Washingtonians in the District, but also expressed empathy for people hoping to put down roots after moving to D.C. for higher education. That particular passion appeared to be animated, at least in part, by his personal experience.

“I’m from Oakland, California,” Orange said. “But I finished my learning here at Howard University School of Law. This is where I met my wife.”

“We need our young brains to be here,” he declared at one point.

Prior to Cornish’s testimony, Orange screened slides showing various designs of tiny houses, which have become popular with Americans hoping to save money and be environmentally conscious. He sounded every bit the salesman talking about them — “It’s nice, it’s neat, it’s new, and it can be yours!” — but not everyone at his hearing was buying his entire pitch.

Questions surfaced about whether low-wage workers could afford the houses even with their cheaper cost. Then Council member Brianne Nadeau challenged Orange’s plan to pay for them using an existing funding stream. (Orange said he was open to using city bonds instead.)

The mayor’s representative raised potential concerns too. Deputy Mayor for Greater Economic Opportunity Courtney Snowden said she would need more staff or consultants to manage the new initiative. She added that zoning regulations would need to be changed as well. Fundamentally, though, Snowden stressed “support for the underlying goals and spirit of this legislation.”

“I’m intrigued by the tiny house concept and excited that it is further pushing an important conversation about the ways in which we as a city can provide much-needed housing options,” she said in her testimony.

In an exchange with Orange that was friendly and playful, Snowden recalled watching shows about tiny houses on HGTV and liking what she saw. She even suggested their could be a tiny house in her own future.

“I gotta tell you, I’ve been remarkably impressed by the architecture,” she said. “I think I need a little more space, but I wouldn’t mind living in one.”