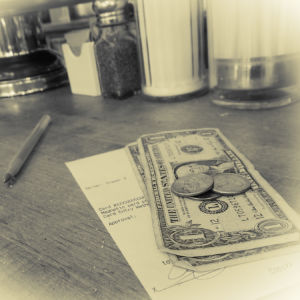 Even Tipped Workers Are Entitled to the Minimum Wage

Employees working on tips get a minimum wage from their employer that is far below most other workers, but it’s often overlooked that employers must make up the difference if tips don’t bridge the gap.

Minimum wage advocates often cite tipped workers as an example of why the current standard is unjust. Federal law requires employers to pay them $2.13, a fraction of the minimum wage. Some believe the tipping system should be outright ended. In reality, however, employers are still required to make up the difference.

“If the tips don’t push their hourly wage above the minimum wage then the employer needs to supplement it so they do reach that minimum wage threshold,” National Federation of Independent Business Research Director Holly Wade told InsideSources.

The federal minimum wage is currently at $7.25 an hour for all nonexempt employees. Minimum wage advocates have pushed to include tipped workers in their fight to raise the minimum wage. The Small Business and Entrepreneurship Council (SBEC) notes the push to include them ignores economic reality.

“Quite frankly, this issue is driven by politics rather than sound economics,” SBEC Chief Economist Raymond Keating told InsideSources. “It’s an issue where economics is thrown out the window and it’s just very much a political topic.”

There are a few caveats that could result in tipped workers getting paid less than the minimum wage. An employer might not be aware of the law or purposely ignore it if they thought their employees didn’t know better. Economic Policy Institute (EPI) research found that 83.8 percent of the restaurants investigated between 2010 and 2012 violated the rule in some way or another.

“In order to make sure that she’s getting at least the minimum wage, a tipped worker would have to keep track of all of her tips, add in her base wage, and then calculate her hourly wages for a given week,” EPI Media Relations Director Dan Crawford told InsideSources. “That’s a hard position to put someone in, and doesn’t reflect the realities of tipped work.”

Crawford adds that an employee would then have to go to their employer and ask for them to make up the difference which could be a difficult position for them to be in. University of Connecticut Prof. William Alpert notes it’s uncommon and when it does happen it can be resolved through the Department of Labor.

“They have to make up the difference to $7.25 in tips,” Alpert told InsideSources. “As I understand it, a worker has to complain to Fair Labor Standards. If there is a complaint and the feds have the resources and they think it’s meritorious, they can then go in and investigate to see if it’s valid.”

“The notion that it would be good business to cheat your employees and attract good workers is really laughable,” Keating said. “This is, again, how it gets framed. The evil business owners are trying to take advantage of workers and employees and so on. The real world is a very different situation.”

Keating adds that it is possible for employers to violate the law but it’s likely a very small percentage. Tipped workers tend to make above the minimum wage in tips anyway, and those who don’t are likely not getting abused on a large scale.

“I’m not saying there isn’t a bad actor here or there, obviously,” Keating said. “In everything, whether it’s in government, business or pick another profession, there is always going to be a bad apple. But overall, the incentive in business is to treat your employees well and to keep the best employees.”

The DOL pointed to a fact sheet which details the rules governing tipped workers when asked by InsideSources.  The fact sheet notes that tipped workers can receive a lower hourly wage so long as it’s equal to at least the federal minimum wage or what the state requires after tips. Tipped workers can also ask questions or report a violation to the department directly.

“Business owners try to attract the best employees that they can,” Keating said. “They don’t want high rates of turnover. That costs them a tremendous amount of money from training people and retraining people. It just doesn’t make much sense.”

Keating adds there are a lot of misconceptions about employers and wage laws influencing the conversation. He also notes that special interest groups, like unions, push their agendas through misleading information. Labor unions have been at the forefront of the fight to increase the minimum wage.

Nevertheless, states that go above the federal requirement don’t always include the same protections. Employers in those states must still abide by the federal standard but that could mean tipped workers get paid less than other workers who are in states with a minimum wage that is above the national level.

“There are a number of states that have a minimum wage above the federal requirement,” Wade said. “That tipped part of their compensation certainly varies but the employer has to make sure that their employees are getting paid at least the federal minimum wage or state if it’s required.”

The minimum wage itself is a point of contention among many economists. They generally agree increasing the minimum wage has the potential to limit employment opportunities. Nevertheless, economists have varyied views on how likely such an outcome is and how severe it would be.

The National Bureau of Economic Research and The Heritage Foundation found the increase will have a huge impact on employment. They found the risk is especially bad for young and low-skilled workers. The University of California, Berkeley found any losses would be marginal compared to the potential benefits

The nonpartisan Congressional Budget Office found that increasing the minimum wage could result in at least some job loss.