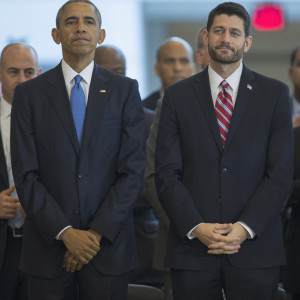 ’Tis the Season, Especially in Washington, for Making Lists

Santa’s not the only one making a list and checking it twice this time of year. Political types from the White House to the Capitol and beyond put out their own lists — naughty, nice or otherwise — before clearing out of Washington for the holidays.

House Speaker Paul D. Ryan’s staff celebrated the passage of Friday’s omnibus spending bill with a tongue-in-cheek list of “First Big Tests” aced by the boss since taking over Oct. 29 from former Speaker John Boehner, including:

Not everyone was grading the passage of the $1.1 trillion spending bill as a victory, of course. More House Democrats than Republicans backed the deal, conservative talk radio called it a betrayal of GOP values and right-leaning think tanks like the Heritage Foundation cried foul. Sen. Tom Cotton, R-Ark., voted no, calling the deal a “rotten process resulting from secret, backroom negotiations.”

Some tea-party groups ran their own naughty lists, calling out the 150 House Republicans and 27 GOP senators who supported the spending bill, threatening primary challenges next year.

But for President Barack Obama, last week’s spending deal was an opportunity to take a year-end victory lap.

“You’ve got wishlists, Santa’s lists and of course a blizzard of year-in-review lists,” he said in Saturday’s weekly radio address. “So I decided to get in on the action. As a nation we face big challenges, but in the spirit of 2015 retiree David Letterman, here in no particular order are my Top 10 Things that Happened in 2015 that should make every American optimistic about 2016.”

House Minority Leader Nancy Pelosi didn’t put out a list, but according to her analysis of the deal (shared by many in the media) Christmas came early for Democrats. After Pelosi and her negotiating team  extracted spending bill concessions from Ryan on solar energy and medical research, she said: “Republicans … gave away the store.”

Other lists had little to do with the omnibus spending bill.

Ryan’s Republican counterpart in the Senate, Senate Majority Leader Mitch McConnell offered up three steps his favorite baseball team, the Washington Nationals, needs to take to get to the postseason next year (find a new starting pitcher, pick up an outfielder with power and dump controversial pitcher Jonathan Papelbon, McConnell says).

Hillary Clinton has a list she’s still working on: 14 female Democrats in the Senate have signed on in support of the former secretary of State’s presidential campaign. The only one missing? Sen. Elizabeth Warren of Massachusetts.

And no one, presumably, wanted to be on the Washington Post’s year-end list of the “Biggest Political Lies of 2015,” but Clinton found herself there, along with President Barack Obama, Clinton’s successor as secretary of State, John Kerry, and Conn. Sen. Chris Murphy. None of them, according to the Post, were a match for GOP presidential front-runner Donald Trump, who topped the paper’s Dec. 14  list.