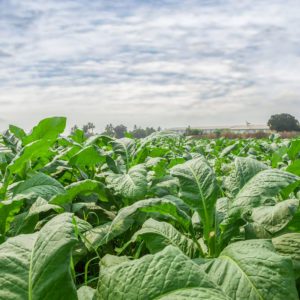 The properties of the tobacco plant, or Nicotiana tabacum, have been well known among researchers for decades, earning it the nickname “the lab mouse of the plant world.” Plant-based vaccines can copy viruses, allowing the body’s immune system to recognize them and create an immune response.

Kentucky BioProcessing (KBP), a subsidiary of British American Tobacco (BAT), might seem a surprising contender for a COVID-19 vaccine, but it’s working on one using tobacco plants. And it’s not the first time. They played a key role in developing one of the most successful antidotes to the Ebola virus in the Democratic Republic of Congo.

“The technologies and processes that KBP develops make it possible to harness the biochemical processes of tobacco plants to produce specific complex proteins more efficiently and effectively than they can be produced using more traditional methods, ” said KBP spokesperson Kaelan Hollon. “The tobacco production system offers a much faster and less expensive way to move from product concept to actually having material in hand.”

According to BAT,  this method can reduce the time required to reproduce vaccines from several months to about six weeks.

Recent press releases from KBP and BAT indicate that the companies are preparing for phase one clinical trials in humans. British American Tobacco released the news on May 15.

Regulators aren’t quite so optimistic. FDA spokesperson Megan McSeveney said that the development of plant-based vaccines, like the ones developed on tobacco plants, is still in its infancy.

“The technology of using tobacco plants as a medium to create vaccines is nascent,” said McSeveney. “FDA encourages manufacturers who are interested in pursuing this technology to initiate contact with us for guidance early in the development process.”

The concept of integrating genes and antigens into the genomic landscape of a plant could offer effective vaccines that are also cheap to develop. However, there are also bioethical issues like the potential transfer of allergens from plants to humans and animals, which offer cross-contamination and possible mutations.

“The benefits of growing vaccines in plants are, for the moment, not clear: this approach was originally evaluated as a cost-minimization exercise and to enable low and middle-income countries to produce vaccines without a large investment,” said Greta Isac, a spokesperson for the World Health Organization. “The cost and expertise savings from growing vaccines in plants is minor as the vaccine still needs to be purified from the plant material, which is just as complex as purifying it from tissue-culture.”

Isac noted that the world’s only plant-based vaccine in late development is an influenza virus antigen built on a virus-like-particle platform derived from tobacco. Medicago, a plant-based biotechnology company, headquartered in Quebec, is the only company that documents the late clinical trials of a plant-based vaccine.

“While the data suggests that the resulting product may be comparably safe and immunogenic, it is not expected to be significantly cheaper or quicker to produce than any other recombinant influenza vaccine, such as the insect-cell tissue culture-produced influenza vaccine,” Isac said, speaking of the botanical designs of plant vaccines.

Medicago has worked on plant-based vaccines intended to counter several viruses and diseases, which includes an antigen that Medicago helped develop that counters Ebola. Their vaccines are developed using a cousin of the tobacco plant (Nicotiana benthamiana), not the tobacco plant itself.

“We are excited to be moving into Phase I clinical trials this month. We are hoping that Phase I will provide positive results by the end of August, and by September, we’ll be selecting the best vaccine treatment option to initiate Phase 2/3 in October,” Nathalie Landry, Medicago’s executive vice president, Scientific and Medical Affairs, told InsideSources.