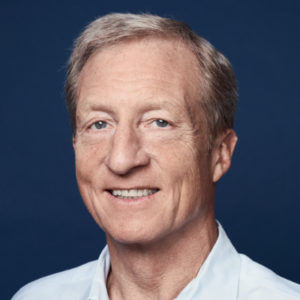 Tom Steyer Has Organization and Money. But Does He Have a Shot?

When a billionaire who founded not one but two national grassroots organizations enters a political race with $100 million of his own money, pundits tend to take it seriously. And yet Tom Steyer’s Tuesday announcement that he’s jumping in the 2020 Democratic presidential contest barely made a splash inside Democratic Party circles.

“It didn’t cause a major wave when he got in, no,” veteran Democratic strategist Bob Shrum, Director of the USC Center for the Political Future, told InsideSources. “We’ve got to see where he ends up on the issues. Money alone isn’t enough.”

“I don’t know how anyone can look at this primary field and think – you know what we need? Another white man,” progressive strategist Rebecca Katz told Time magazine.

“Steyer is a gadfly who is seeking attention,” a Democratic consultant in DC told InsideSources. “As a progressive, he should be happy with the field we have already. It looks like he’s just trying to raise his profile.”

Perhaps, but a billionaire who’s given more to Democratic campaigns than anyone else can’t be dismissed as a “gadfly.” According to the campaign cash trackers at OpenSecrets, Steyer is America’s top liberal donor, contributing nearly $248 million to candidates, PACs and other political organizations. That’s more than mega-donors Michael Bloomberg or George Soros.

When Steyer isn’t paying for Democratic TV ads, he’s starring in them, promoting a #NeedToImpeach movement supported by 67 percent of self-identified Democrats.  More than 8 million Americans have signed Steyer’s petition calling on Congress to remove President Trump from office, according to the NTI website.

To put that in perspective, that’s nearly half of Hillary Clinton’s national vote total in the 2016 Democratic primary.

Nobody predicts that Steyer will get all–or even most–of those potential voters. But it gives him a strong base of motivated activists who agree on a fundamental issue–impeachment–that most of the 2020 field is largely avoiding.

In his announcement, Steyer said he’s resigning from both the Need to Impeach and NextGen America organizations, but he’s still giving them $50 million to continue their work. And while that “work” may not technically be “getting primary voters to support Tom Steyer,” it’s unlikely they’ll be using those millions to support Joe Biden or Pete Buttigieg.

NextGen is so identified with Hassan’s victory that, in 2018 when they were setting their turnout targets, they measured them in “Maggies”–her 1,017-vote margin of victory. While turnout in New Hampshire was up around 15 percent over the previous midterm, in college precincts targeted by Steyer’s organization, turnout was up by as much as 55 percent.

Across the nation, NextGen spent $33 million and registered around 260,000 voters in the 2018 midterms, with a paid staff of 750 active on more than 400 college campuses.  And what state has the highest per capita college student population?

Steyer is also well-known in the environmental activist community for his work on climate change, spending millions of dollars pushing the Democratic Party to embrace his green proposals. Some of those voters have told InsideSources they’re disappointed with the level of commitment to the climate cause from establishment Democrats, making them potential Steyer pick-ups. They were less than thrilled with Joe Biden’s (slightly plagiarized) climate plan, for example.

“Any candidate who is unwilling to extract themselves from their relationship with the fossil fuel industry will not meet our high level of expectations for climate action candidates,” Stephanie Scherr of the climate activist group ECHO Action told InsideSources when the Biden plan was released.

Tom Steyer will meet those expectations–and then some.

So will Steyer’s candidacy hurt moderate Democrats like Joe Biden? Perhaps. But a more likely scenario is that Steyer pulls young voters and far-Left progressive activists away from candidates like Sens. Elizabeth Warren and Bernie Sanders, two of the (presumed) Granite State frontrunners. By driving their numbers down, Steyer could lower the bar for Joe Biden to win New Hampshire, denying two of his strongest challengers a much-needed win.

And, the conventional wisdom goes, if Joe Biden can win Iowa and New Hampshire, that will make him all but a shoo-in among African-American voters in South Carolina–and the Democratic primary is over by March 1.

“If Biden–or any candidate–wins both Iowa and New Hampshire, the odds are extremely high that they’ll be the nominee,” Shrum said.

Perhaps that’s why some progressive groups are unhappy about Steyer’s move. “The decision to get in this late means a candidate must look at the entire diverse field and think, ‘I alone can win this.’ It’s an entirely different decision from announcing in January when almost nobody was in the race,” Adam Green, co-founder of Progressive Change Campaign Committee, said in a statement. “Especially for a rich white male, this decision should be gut checked in a major way.”