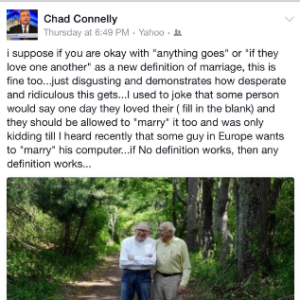 But a top deputy to Priebus has continuously been given a pass for public comments on marriage that hardly fit within the definition of “respect” and other social media postings that, if posted by another RNC staffer, would be subject to strong disciplinary action. Chad Connelly, however, was handpicked by Priebus as RNC Director of Faith, and rather than fitting within the normal organizational structure of the RNC, in which his position would report to a coalitions or political director, he reports directly to the Chairman. Connelly previously served as Chairman of the South Carolina GOP before being recruited by Priebus to move to the RNC.

One Facebook post reacting to last week’s gay marriage decision by the Supreme Court shares an image from Mike Huckabee’s presidential campaign, stating “THE SUPREME COURT IS NOT THE SUPREME BEING.”

RNC staff is strictly prohibited from supporting any primary campaign, and sources say other RNC staff members have been fired for similar social media postings. 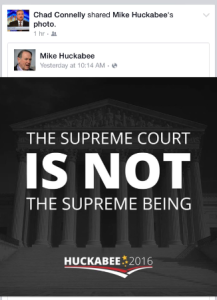 her Facebook post from late May veers sharply off message from the RNC’s calls for respect. Connelly referred to an article about a gay Pennsylvania couple now in their 70s. Fifteen years ago, with gay marriage illegal in the state, one partner adopted the other so they could gain legal privileges when one of them died. With gay marriage now legal in Pennsylvania, the “father” and “son” couple got married. 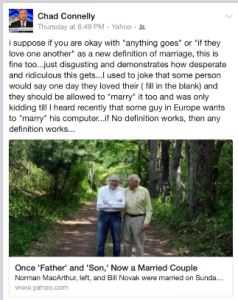 Connelly called the marriage “just disgusting and demonstrates how desperate and ridiculous this gets…I used to joke that some person would say one day they loved their (fill in the blank) and they should be allowed to ‘marry’ it too and was only kidding till I heard recently some guy in Europe wants to ‘marry’ his computer.”

Connelly’s past is not without controversy. In 2002, he authored a book about America’s founding that contained a wide range of factual inaccuracies.

The RNC did not respond to requests for comment.