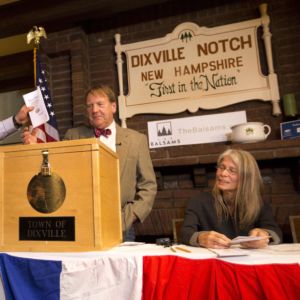 While many people were fast asleep, three small New Hampshire communities cast the first ballots in the 2016 election.

It’s a long and honored tradition in the Granite State, although outsiders might find it strange, that the people of Dixville Notch, Hart’s Location and Millsfield, opened their polls at midnight and have already closed them.

The Dixville Notch election results are in: https://t.co/bZnfiTHoN1 #ElectionDay pic.twitter.com/SVddzwCOkl

In Millsfield, Trump had a decisive win over Clinton, 16-4, with one write-in for Sanders.

With these polling locations closed, Trump came out ahead of Clinton 32-25.

Although nearly 40 million people have cast their ballots in other states that have early voting, New Hampshire sticks to only voting on the “Tuesday next after the first Monday in the month of November.”

According to New Hampshire state law, communities with fewer than 100 voters can get permission to open their polls at midnight and close them as soon as all registered voters have cast their ballots.

Don’t read too much into the results here. The three towns in the North Country lean conservative and tend to vote Republican in most elections.

But the results are very telling about the state of the 2016 race on Election Day. Although the towns are more conservative, Dixville Notch and Hart’s Location voted for the Democratic presidential nominee.

Dixville has voted for the Republican in the race since 1960 until going for President Barack Obama in 2008 and splitting the vote between Romney and Obama in 2012.

Although the towns buck tradition every now and then, it’s interesting to note when they do and how it reflects the race statewide.

Both Clinton and Trump are the two most unpopular candidates to run for president.

People on the right think Clinton was a terrible secretary of state and put the national security of the United States at risk with her private sever. And on the left, people find Trump’s comments sexist, racist and xenophobic and would put our national security at risk.

And then of course, there’s people on both sides who believe the two are completely untrustworthy and feel they have to pick the lesser of two evils.

New Hampshire has seen it all from the beginning. As the first primary in the nation, presidential candidates spend copious amounts of time in the Granite State, holding town hall meetings and going to strange, yet hilariously named events like “Politics and Eggs.” The one-on-one time with the candidate is important to the people here.

With the added twist that New Hampshire’s four electoral votes could help decide who wins the presidency, Trump and Clinton in the last few weeks have made it their mission to take the state, sending supporters on their behalf like Sen. Elizabeth Warren, Vice President Joe Biden, Chelsea Clinton and Obama for Clinton or Ivanka Trump, Sen. Jeff Sessions, Gov. Chris Christie and former New York Mayor Rudy Giuliani for Trump.

But there are still several people who just can’t vote for Clinton and Trump. So they end up writing someone else in.

In New Hampshire, write-ins are allowed and are counted. So it’s telling that Romney, Kasich and Sanders all got votes and it further reflects the political discourse in the state and nationwide.

For many, Romney was seen as a last-stand. Throughout the campaign, as the Republican primary looked to be heading in Trump’s direction, many called on Romney to enter the race or even run as a third-party candidate.

Romney won the New Hampshire GOP primary in 2012, and Granite Staters still have a fondness for the former governor of their neighbor to the south.

Kasich came in second in the state’s 2016 GOP primary, a shock to many. The Ohio governor spent a lot of time in the state and held more town hall meetings than any other candidate.

For Romney and Kasich, the two are seen as a more moderate option to Trump and it’s not necessarily surprising to see their names pop up as a write-in vote.

For Sanders, don’t be surprised if you see more of his name as a write-in throughout the state and even across the country. Many “Bernie Bros” are still frustrated with how the Democratic primary went down. Some think it was rigged in Clinton’s favor, and recent WikiLeaks emails are offering evidence the party leaders were secretly aiding Clinton.

Sanders won New Hampshire in the primary this year and the Vermont senator has a loyal following here in the state. There are actually several movements across the country to get people to write-in Sanders’ name to prevent Trump or Clinton from getting to the necessary 270 electoral votes to be president, invoking the Twelfth Amendment, and forcing the election to be decided by the House of Representatives.

A a man named Michael Sparks created a website to encourage people to temporarily move to Vermont with him to canvass and encourage people to write in Sanders’ name. His hopes was to flip just one state to prevent either major party candidates from getting to 270 and since Sanders already has support in Vermont, why not choose that one.

The site HowtoWriteinBernie.com gives people extensive directions how to write in Sanders’ name and reasons why they should do it. They’re focusing their campaign on Alabama, California, Iowa, New Jersey, New Hampshire, Oregon, Pennsylvania, Rhode Island, Washington, Wyoming and Vermont.

“New Hampshire was so friendly to Bernie during the primary, and it’s so close to Vermont that we’re hoping that the excitement might spill over,” said Beverly DeCer, cofounder of the website. “1,000 votes in New Hampshire can really swing the state.”

She’s right about that. In 2000, Al Gore lost New Hampshire by 7,000 votes, while Ralph Nader took 19,000 votes, and it’s believed they were mostly Democrats. So who knows what could happen if more people write in Sanders’ name.

While these movements are very real, it’s difficult to tell the kind of impact they will have at the polls. While many might write-in someone so they can have a good conscience and be able to sleep at night, only after all the votes are counted will people be able to see how it played out in the election.