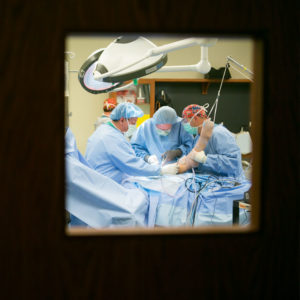 An orthopedic surgery being performed at the Surgery Center of Oklahoma.
[IS] Opinions

It’s neither exaggeration nor ideology to argue that the pricing of health care services in America resembles the pricing of everything in the old Soviet Union. That’s why Keith Smith’s Surgery Center of Oklahoma (SCO) stuns U.S. healthcare professionals, who are unaccustomed to meaningful, transparent prices.

In competitive sectors of market economies, prices reflect costs to producers and value to consumers. The price of a car is the sum of underlying costs: materials, labor, marketing, distribution, capital. The price also reflects the sum of characteristics that consumers value: speed, reliability, comfort, aesthetics.

In contrast, Soviet prices were accounting fictions, detached from real economic factors. Opaque and decreed by distant bureaus, they reflected bureaucratic divinations — not producer costs or consumer values. Prices provided little information about what to make or buy. And those same pathologies infect American healthcare.

Ask how much a surgery will cost. Your doctor will likely shrug or offer a meaningless number plucked from the firmament. After surgery, you’ll probably experience a months-long stream of indecipherable documents.

Keith Smith and his partners decided to be the exception. The SCO website features outlines of the human body. Click on the knee, and down falls a menu of surgical procedures. Click on “Total Knee Replacement,” and up pops a price: $15,550. Click again to schedule surgery. Once you have your new knee, you pay $15,550 — period.

Each semester, I show SCO’s website to my graduate students, all of whom are mid-career health professionals — doctors, nurses, professors, hospital administrators.

“Where do the anesthesia charges show up?” one asks. “They’re already included in that price,” I answer.

The students then cock their heads the way my dogs do when I play a harmonica. Unlike typical hospitals’ charges (or Soviet prices for tractors or tomatoes), the $15,550 reflects actual underlying costs.

Keith tells of a patient in Georgia who needed a particular surgery and happened onto SCO’s website. The procedure cost around $3,600 at SCO. The patient’s hospital in Georgia was going to charge $40,000. The patient told his doctor that, given these prices, he would go to SCO.

Confronted with this challenge, the Georgia hospital dropped its cost by 90 percent to $4,000 — so the patient opted to have the procedure there. Afterward, he called SCO, a bit apologetically, to tell Keith he had saved him $36,000 without even doing the surgery. Keith says the story itself was more valuable than the $3,600 he would have charged.

Keith says physicians were initially skeptical about transparent pricing but are coming around to the idea. A modest number have begun moving to similar pricing models. Many have banded together as the Free Market Medical Association, which connects cost-conscious patients and providers. Still, there are impediments. Large hospitals and insurers have strongly resisted this movement. Most insurers refuse to allow employers with whom they contract to engage in direct contact with such facilities.

Perhaps the biggest impediment to transparent pricing is the federal government’s outsize role in providing health insurance. Programs like Medicare rely on price controls and rationing (formal and informal) to balance supply and demand and maintain budgets. Private insurers design their plans to mimic Medicare — in part because it is easier to do so than to maintain two radically different pricing models.

Still, Keith is optimistic, noting that individuals and self-funded employers are rejecting hospitals’ opaque and inflexible pricing and shifting their contracts to facilities like SCO: “The state of Oklahoma’s self-funded health plan is now waiving all out-of-pocket expenses for beneficiaries who elect to secure their healthcare services at transparently priced facilities like mine. A $200 million savings is predicted for the first year this is fully operational, after a limited roll out this past April.”

Interestingly, SCO and other facilities with transparent pricing regularly attract patients from Canada and other foreign countries. In part, this is because in those countries, as in America, incoherent healthcare pricing fails to reflect costs to producers and value to consumers. Our problems are visible in patients’ indecipherable hospital bills. In Canada and Europe, public financing of healthcare may render the problems less visible, though no less real.