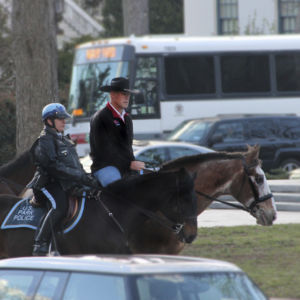 Ryan Zinke knows how to make an entrance. The day after his confirmation as Donald Trump’s secretary of the interior, the former Montana congressman rode to his new office on Tonto, a roan gelding. For Zinke, it was a nod to his Montana heritage. The secretary of the interior oversees 500 million acres of public land, including the 59 national parks, and handles relationships between the federal government and native American tribes. Because of this, tribal leaders have been watching Zinke’s nomination carefully. As the new interior secretary, Zinke will oversee the Bureau of Indian Affairs, the Office of the Special Trustee for American Indians and the National Indian Gaming Commission.

Tribes traditionally look to the secretary of the interior to set the tone of meetings with other cabinet members. Many are encouraged by Zinke’s selection. An adopted member of the Assiniboine-Sioux from Northeast Montana, Zinke has repeatedly stressed his commitment to respecting tribal sovereignty.

After being sworn in as the new interior secretary by Vice President Mike Pence, Zinke pledged in a statement to work to manage and preserve public lands “in a way that benefits all Americans for generations to come.”

“This means responsible natural resource development, increased access for recreation and sportsmen, and conservation that makes the land more valuable for our children’s children. Importantly, our sovereign Indian nations and territories must have the respect and freedom they deserve.”

His appointment has elicited mixed reactions from Native American observers, who are heartened by Zinke’s record of respectfully dealing with tribes and pro-conservation statements. At the same time, many worry about his connection to the Trump administration, which approved the Dakota Access Pipeline without waiting for a final environmental impact study.

The National Congress of American Indians praised Zinke and the “great deal of understanding of the federal government’s trust responsibility to tribes” he gained representing seven federal tribes in Congress.

“Throughout his service as a Congressman for Montana, he fought for Montanans and Montana’s tribes in the halls of Congress,” NCAI President Brian Cladoosby said in a statement.

“We have no doubt that Secretary Zinke will continue fighting for all tribes as Secretary of Interior,” he continued. “As the trustee to all 567 federally recognized tribes, we wish Secretary Zinke every success in advancing the federal government’s treaty and trust obligations.”

Zinke has particularly strong support from tribes in his home state, some of which are optimistic that his appointment will give them better access to the Bureau of Indian Affairs. Harry Barnes, chairman of the Blackfeet Nation called Zinke’s appointment “a great day for Montana.”

“Montana tribes will have an ear in the Department of the Interior, which oversees the Bureau of Indian Affairs,” Barnes said.

During his time in the House, Zinke worked to gain federal recognition and land rights for tribes in Montana. They have been supportive of his selection since Trump first announced that Zinke was being considered for the position.

“He would be good, not only on behalf of Montanans, but also Indian Country,” said Darrin Old Coyote, former chairman of the Crow Tribe. “He comes from a state that has an abundance of natural resources, whether it’s fish or coal, and who knows, maybe it will be easy to pitch for Montana.”

In Utah, however, several groups are watching closely to see if Zinke and the Trump administration will take action against the Bear Ears National Monument created by President Obama in the waning days of his presidency. Utah’s congressional delegation is pushing for Zinke to “untangle” the state from regulations related to the new monument.

The possibility worries environmental groups and Native American tribes in the area.

“We have grave concerns that he may be misled by Utah’s congressional delegation and local elected officials into advising President Trump to take action against the Bears Ears National Monument,” said Scott Groene, executive director of SUWA.

The Utah tribes have invited Zinke to come to the area to discuss their concerns.

Even in these early days of his term as new Interior Secretary, Zinke will have his hands full. In addition to the Bear Ears Monument and the ongoing oil pipeline lawsuits and protests, he will need to help put the Bureau of Indian Affairs in order. A report from the Government Accountability Office released in mid-February included management of tribal programs on its “high-risk” for fraud, abuse, and mismanagement list.