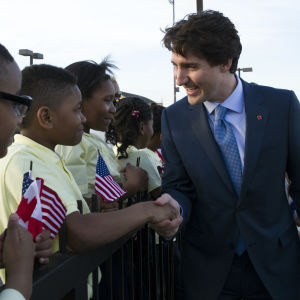 With Trudeau in Town, Lawmakers Call for Canada to Get Tough on Drugs

That crowded agenda ought to include America’s growing opioid crisis — and Canada’s complicity in the problem — a bipartisan group of lawmakers made clear this week.

House and Senate members penned a letter calling for stronger action from the Trudeau administration on the flood of Canadian painkillers ravaging American communities.

The letter calling out Canadian foot-dragging on opioid abuse comes as a $725 million spending package to beef up prescription drug monitoring and improve treatment for addicts is expected to clear the Senate on Thursday — the same day Trudeau joins President Barack Obama at the White House for talks, a press conference and an official state dinner.

Lawmakers are asking the Trudeau administration to get serious about fighting prescription drug abuse in both countries by moving more quickly to limit the availability of non-abuse deterrent opioids, including oxycodone pain relievers.

The health crisis has taken on new political urgency in states like New Hampshire, Massachusetts and elsewhere in recent months as media coverage and warnings from federal and local officials have brought the scope of the problem to the fore. According to the Centers for Disease Control and Prevention, 47,000 Americans died from drug overdoses in 2014, with more than half of those opioid-related. Opioid overdoses have tripled since 2000 and overdose is now the country’s leading cause of accidental death, ahead of motor vehicles and firearms.

“This is a life or death issue,” said Ayotte, speaking on the drug abuse crisis during the GOP’s weekly address over the weekend. “These are not just numbers. Behind every statistic and behind every headline is a life that has been lost.”

In the lawmakers’ letter — which was addressed to Canadian Minister of Health Dr. Jane Philpott, a Trudeau appointee — Ayotte and colleagues call for tougher Canadian drug manufacturing standards that would make it more difficult for pain relievers to be abused:

“In our states and in Canada, prescription drug abuse is negatively impacting the quality of life of millions of citizens, costing lives, and presenting significant challenges to our first responders and law enforcement officials,” the lawmakers wrote. “It is concerning to us that, as you know, Canada still permits the manufacture and sale of non-abuse deterrent formulations of oxycodone pain relievers, and these drugs continue to find their way across the border to every region and almost every state in the United States.”

“It is our strong belief that you now have an excellent opportunity to address this urgent matter by proposing a more robust series of measures than those that were contemplated in the original regulatory package. To that end we respectfully urge you to consider accelerating the timetable for the removal of non-abuse deterrent formulations of oxycodone pain relievers from the Canadian marketplace.”

While lawmakers on the congressional end of Pennsylvania Avenue would like to see Trudeau, the son of the late Pierre Trudeau, one of Canada’s most popular politicians ever, put more regulatory muscle into the drug-abuse fight, the White House is looking for support on trade and climate change.

Trudeau and Obama met at the Asia-Pacific Economic Cooperation meeting in Manila in November, just after the prime minister took office. Since then, the 44-year-old Canadian has offered some high-profile support for the Obama administration on trade and the Syrian refugee crisis.

The White House has been relatively quiet about what the president expects in return for rolling out the red carpet for the prime minister — Thursday night’s event is the first White House dinner honoring a Canadian head of state since the Clinton administration — but Trudeau reiterated on “60 Minutes” Sunday he is willing to increase the scope of Canada’s role in the ongoing fight against the Islamic State in Syria and Iraq.

Like Obama, to whom he has often been compared, Trudeau has also been outspoken about Western countries welcoming Syrian refugees. Since he took office, Canada has taken in 25,000 refugees, with Trudeau personally welcoming some of the arrivals at Toronto’s airport.

That’s sure to be a topic at Thursday’s joint White House press conference with Obama, along with the prime minister’s carefully-worded comments on Republican front-runner Donald Trump.

On Monday, Trudeau said he will work with whomever succeeds Obama in the Oval Office: “There have been lots of times in the past that the ideologies of president and prime minister haven’t perfectly matched up, but where there’s been a very constructive and positive relationship.”