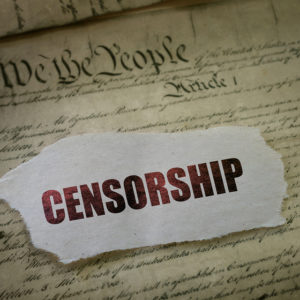 Since “Saturday Night Live’s” debut in 1975, the show has been intermittently funny, genuinely topical, and largely sympathetic to liberal causes and candidates, Norm MacDonald’s routinely rough treatment of Hillary Clinton notwithstanding. Republicans line up to be guests just the same, but no matter how badly the SNL cast mocks them, everything political said on the air is absolutely protected by the First Amendment.

Yet, President Trump, one of the few former SNL hosts who has taken an oath to “preserve, protect and defend the Constitution of the United States,” now calls for the government to involve itself in managing what people may say on television. And he’s not looking to regulate anything like obscene language. He seeks instead to silence criticism of himself and his presidency.

In a tweet suggesting that he has neither the disposition nor the historical sense to serve as president, Trump wrote “A REAL scandal is the one sided coverage, hour by hour, of networks like NBC & Democrat spin machines like Saturday Night Live. … Should be tested in courts, can’t be legal? …”

It can’t be easy on anyone to be criticized and ridiculed on a daily basis, but Trump should be keenly aware of two things. First, he brings the lion’s share of this criticism on himself. For evidence, start with his ill-advised tweeting. Second, it comes with the job. That he cannot deal with either of these facts is telling. That he is unaware of a deep historical precedent is unnerving.

Trump isn’t the first president to seek to silence his opponents. The first was our second president, John Adams, who succeeded where Trump will fail. And if history is an adequate guide, Trump will be lucky to fail.

John Adams signed the Sedition Act a couple of weeks after the 4th of July in 1798, just seven years after the ratification of the First Amendment, which prohibited the federal government from interfering with people’s right to speak out against the government. But Adams and Federalist congressmen didn’t spend a lot of time worrying about whether the Sedition Act violated the Constitution. They were concerned with shutting down criticism. It was a time of crisis in the United States, as war with France was a very real possibility. Then as now, national crises afford politicians the excuse of undermining people’s rights and liberties in the name of “national security.”

Under the law, at least 26 newspaper editors were prosecuted in federal courts, making the Sedition Act a violation of the First Amendment’s guarantee of a free press in addition to the violation of its guarantee of free speech. Backlash over the law led, in no small part, to the ugliness of the election of 1800 — still the worst in American history. Ominously for present-day Republicans, the Sedition Act also led to the Federalist party’s demise. The Federalists became a minority party after the election of 1800, then completely disappeared over the next 25 years.

If he had even an ounce of historical sense, Trump would be much more circumspect in what he wished for. But he may be wholly ignorant of the Adams backstory. The “Saturday Night Live” cast has every right to mock him, and any other politician they see fit to mock. And the American news media has every right to cover him, and any politician, in any way it chooses. Presidents, indeed all politicians, should take great care when undermining the protections afforded by the Constitution, because in the end, that is the ultimate sedition.