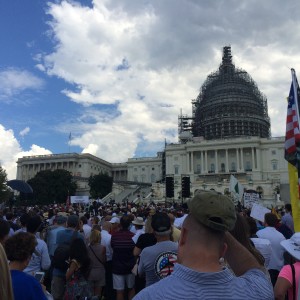 It’s been a week of surreal music cues.

On Tuesday, when Kentucky clerk Kim Davis emerged from jail after refusing to issue marriage licenses to same-sex couples, she walked on stage to Survivor’s “Eye of the Tiger” during a nationally-televised rally with supporters in front of the Carter County Detention Center.

Fox News broadcasted video of Davis and her lawyer standing there with Republican presidential candidate Mike Huckabee, and even anchor Shepard Smith sounded a bit bemused: “This is an actual thing that is live,” he said on the air, marveling as the theme to Rocky III blared over cheers of cross-waving Christians.

Another actual thing that was live, albeit on Wednesday, was Donald Trump, real estate mogul and Republican presidential frontrunner, taking the podium on the west lawn of the U.S. Capitol while a different ’80s song declared, “It’s the End of the World as We Know It (And I Feel Fine).”

The R.E.M. track was the intro to Trump’s remarks on President Obama’s nuclear deal with Iran — one of the keynote speeches at an afternoon Capitol Hill rally in opposition to the agreement. Trump told a crowd of hundreds gathered in 90 degree heat that he is an expert dealmaker, and he has never “seen any transaction so incompetently negotiated as our deal with Iran. And I mean never.”

“We are led by very, very stupid people,” he said. “Stupid people. We cannot let it continue.”

Pivoting to an argument seen as key to his candidacy, Trump cast himself as a leader who would make America a winner in various global competitions.

“We will have so much winning if I get elected that you may get bored with winning,” he said. “We are going to start winning big league on trade, militarily. We’re going to have such a strong military that nobody — nobody — is going to mess with us.”

Cruz, who’s open about his desire to win over Trump’s supporters in the race for the White House, delivered fire-and-brimstone rhetoric directed at congressional colleagues poised to vote for the Iran deal.

“If you vote to send billions of dollars to jihadists who have pledged to murder Americans, then you bear direct responsibility for the murders carried out with the dollars you have given,” he said. “You cannot wash your hands of that blood.”

The senator added that “any commander in chief worthy of defending this nation should be prepared to stand up on January 20, 2017, and rip to shreds this catastrophic deal.”

Not to be outdone, Palin argued that the current president had betrayed America by doing a deal with the country that is the number one state sponsor of terrorism in the world.

“Only in an Orwellian Obama world full of sprinkly fairy dust blown from atop his unicorn — as he’s peaking through a pretty pink kaleidoscope — would he ever see victory or safety for America or Israel in this treaty,” she said. “This treaty will not bring peace. You don’t reward terrorism. You kill it!”

As angry as the speakers on stage sounded, their rage was nothing compared to that of the crowd. Largely white and older, the rally attendees held signs that read things like, “Obama/Hillary/Kerry: fulfilling Hitler’s dreams,” and “POTUS in bed with those who behead.” Multiple people were heard referring to the president as anti-American and “a traitor.”

“I mean, they make Hollywood movies about treason at the highest levels — this is happening right in front of our faces,” said New Jersey resident Rebecca Bergknoff in an interview. “You don’t support people who want to kill you. It’s that simple.” 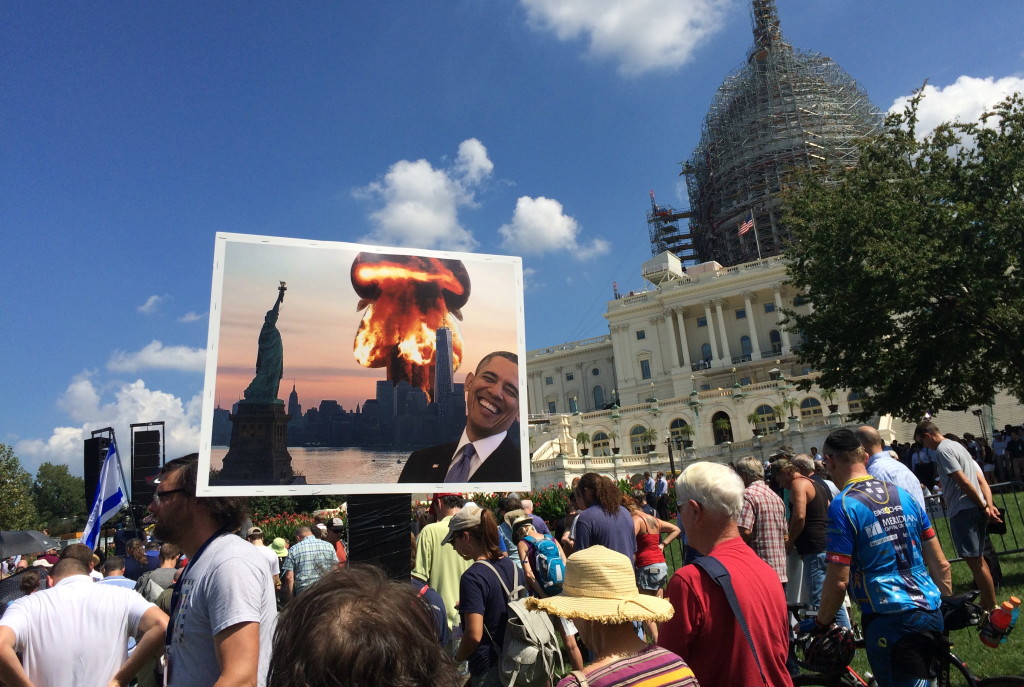 Meanwhile, three women from Arizona found a unique way to express their anger at the president: they brought a “Bop Obama” punching bag with them to the rally: 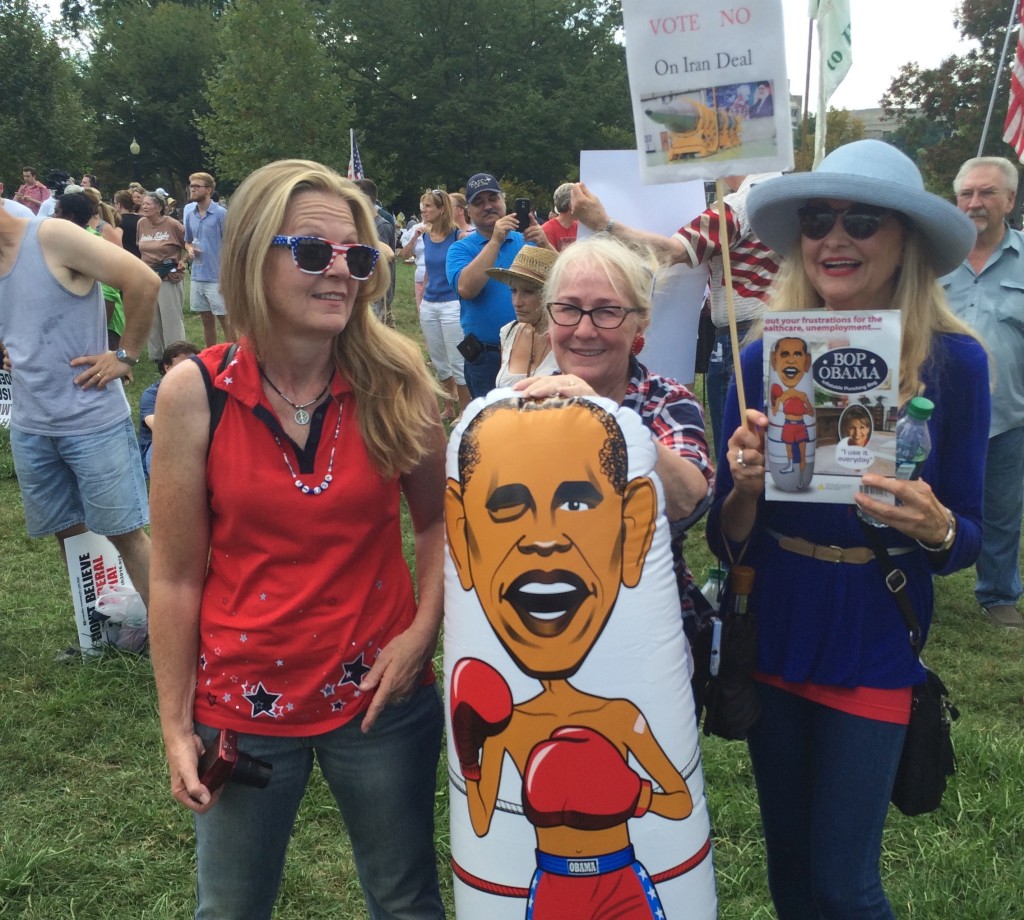 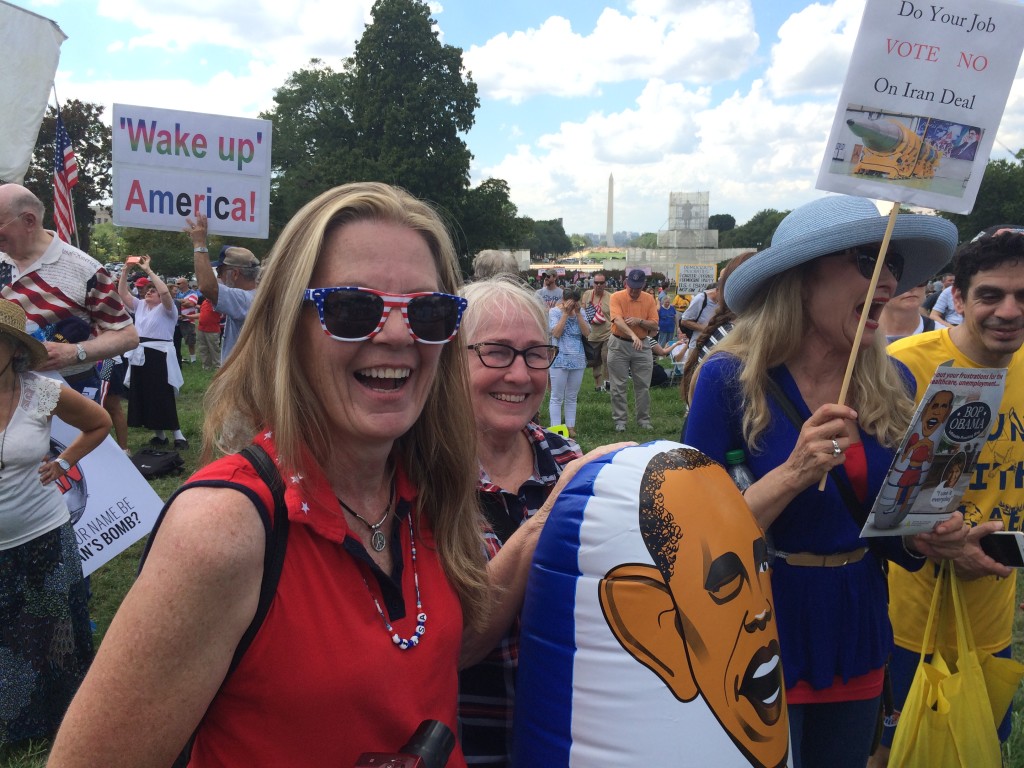 Conservatives’ hostility to the Iran deal isn’t lost on their Republican representatives in Congress. Several spoke at Wednesday’s rally, and the House Armed Services committee has a hearing scheduled for Thursday on the agreement’s “implications for missile defense and nonproliferation.”

Nevertheless, the New York Times reported Wednesday that Senate Republicans “conceded that the White House had prevailed and the [Iran] accord could not be stopped.” Obama has secured enough votes in Congress to support the deal.

For many speakers at the rally, stopping the deal wasn’t the point. Their demonstration was simply about standing up and being counted as opponents of a policy they predict will lead to disaster.

“I want the Almighty God — the God of Abraham, Isaac and Jacob — to know that I stand with His law, not those that are passed in the corrupt chambers behind me,” Beck thundered when his turn to speak came. “Let this be the day that we all declare we shall serve no other king but God!”

The radio host then issued a dire warning to “those who wish to stand on the sidelines, to claim ignorance or helplessness”: “Not to stand is to stand. Not to speak is to speak. There will be no spectators in this struggle, and God will not hold you blameless.”

By the end of Beck’s speech, that R.E.M. song was starting to seem appropriate. Many of the ralliers genuinely believe the end of the world may be nigh. That said, if we’ve learned anything from 2015’s summer of populist anger, it’s that few people participating in American politics are feeling fine.