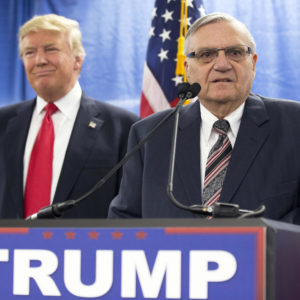 Trump, Arpaio and the Cabal of Washington

Within the context of our political climate, there are two definitions for the word “power.”

The first definition that comes to mind is the literal meaning of the word, as defined by the Oxford Dictionary: “The capacity or ability to direct or influence the behavior of others or the course of events.”

Then, there is President Donald Trump’s definition of power: the unilateral commandeering of the rule of law.

I must come right out and say it … Donald Trump’s pardon for Sheriff Joe Arpaio is an insult to freedom-loving Americans.

Ever since the 2016 election, I’ve seen my vote for Donald Trump become more of a mistake than a blessing. Granted, a vote for Clinton was not an option either; however, I am having a hard time taking the presidency seriously.

From furthering our failed 17-year “nation-building exercise” in Afghanistan to his propping up of protectionism, Trump’s use of his title — and the governmental resources associated with it — have made him a threat to free markets, economic and social freedoms, and all our civil liberties. And, with Arpaio’s pardon, Trump would much rather align himself with some criminal and pay-to-play consultants over adequate public servants.

There are exceptions in Trump’s administration, yes. Allow me to highlight that individuals like Neomi Rao and Scott Pruitt are among the many liberty-minded people struggling to make life better for our country’s citizenry.

Something doesn’t sit right with me when it comes to the Trump-Arpaio relationship, though. For one, Trump dismissed the charges for a law enforcer and elected politician that was held in contempt of court and convicted by a federal judge. Plus, as a sheriff, the man has a horrific civil rights profile with the Department of Justice.

To be honest, it appears that Trump is preparing to disclose some major announcement that pertains to the potential involvement of Arpaio. Is he going to join Trump’s White House as an immigration law enforcement consultant? Is he being groomed for the many positions that are now suddenly open in the West Wing? Or, is Arpaio going to be a figurehead for Trump’s 2020 re-election efforts? The pardon could be motivated by some sense of loyalty between Trump and his state-based surrogates. Something is at work obviously, yet further speculation can make these theories even more colorful than they are now.

Trump is becoming the swamp. In fact, his positioning on several issues has become a representation of a liberal presidency. Like President Barack Obama, Trump is acting in a manner that resembles “my way or you will be placed on a drone-targeting list.” There are clear distinctions between Obama and Trump; however, the similarities are uncanny.

Just like the Arpaio situation, Obama dismissed the clearly apparent criminal activity of former Secretary of State Hillary Clinton. Both presidents looked past the clear abuse of power both Arpaio and Clinton exuded. Obviously, the difference was in scale and purview; but the fundamental principle remains. And, that principle is that both Arpaio and Clinton do more injustice to the American people than help them.

The Cabal of Washington is a revolving door. It extends beyond the Beltway to the states, other countries and to the highest rung of corporate power. Trump, through pardoning Arpaio, exemplifies the typical politician who seeks to form the government to benefit his own self. This mindset is dangerous because it grows government to levels that are nearly impossible to shrink. Rather than permitting the judicial system to run its course and punish Arpaio for his criminality, the overreach of federal executive power came busting through the door.

Arpaio’s age should’ve played a factor in sentencing; however, he needs to pay his reparations to the country through fines, or deferred sentencing, or even hundreds of hours of community service. And, like Obama, this move by Trump proves that he wishes to operate this country — with his allies — in a capacity that places him above the rule of law.

I voted for Trump to end the cronyism in government and the marketplace. That was a mistake. My agenda is liberty for all and pure economic competition. People have the right to live, believe and work how they please without interference from the government. Similarly, the same goes for criminals. You are innocent until proven guilty by a court of law. Arpaio was proven guilty and convicted. So, it is upon Arpaio’s self to serve out his sentence to the best of his ability. He will never have the chance.

Trump’s dismissal of Arpaio’s crime is a waste of time, tax dollars, and it further threatens Trump’s popularity. It is an expansion of governmental power, all in the name of cronyism.

Until Trump places his focus on real, free-market-oriented policy while working to reign in corruption, he will continue to defecate on the American people — just like Obama, Clinton and many others before him.

I rest my case.