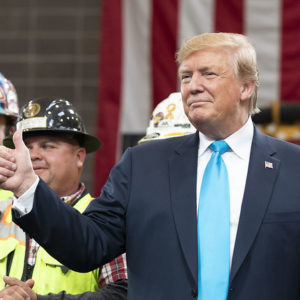 President Donald Trump’s announcement that he will finalize revisions to an environmental review process on infrastructure projects could spur major investment and kick-start a pandemic-trounced economy.

Or, his political opponents say, it could weaken vital environmental protections and hasten the destructive effects of climate change.

The reality, however, is much more nuanced. And the final step to modernize the National Environmental Policy Act (NEPA) will require congressional action.

“There are some positives in the reforms but to have sustainable reform of NEPA on the scale that’s necessary, you can’t do that just through executive action,” said Josiah Neeley, a resident senior fellow with R Street, a conservative and libertarian think tank.

The 50-year old NEPA requires federal agencies to consider environmental impacts before taking actions such as approving permits for pipelines, highways, publicly owned facilities, and other projects. It also provides for public comments.

Over the years, it has become weaponized as environmental advocates used the NEPA process to kill oil and natural gas pipelines. The reaction from progressive groups to Trump’s announcement was typical of the hyperbole that accompanies actions from the current administration.

“The gutting of this bedrock environmental law denies the American people their simple right to have a say when pipelines are built next to their schools or coal mines are dug in their backyards,” Center for American Progress Senior Vice President for Energy and Environment Christy Goldfuss said in a statement. “Today’s final rule denies the reality of our climate crisis and the reality of our democracy. The voices of the people will not be silenced.”

The energy sector, on the other hand, praised the decision. “Today’s action is essential to U.S. energy leadership and environmental progress, providing more certainty to jumpstart not only the modernized pipeline infrastructure we need to deliver cleaner fuels but highways, bridges and renewable energy,” American Petroleum Institute President and CEO Mike Sommers said. These reforms will help accelerate the nation’s economic recovery and advance energy infrastructure while continuing necessary environmental reviews.”

“This process, that has caused trillions of dollars over the years for our country and delays like you wouldn’t believe, this is a truly historic breakthrough, which means better roads, bridges, tunnels, and highways for every ups driver every citizen across our land,” Trump said during an event in Atlanta where he announced the reforms. “We are reclaiming America’s proud heritage as a nation of builders, a nation that can get things done.”

The NEPA process has no predetermined outcome for projects, rather it is a planning and procedural tool for the various agencies involved in permits and approvals. The original motivation behind the act was the large highway projects undertaken by the Army Corps of Engineers.

Over time, infrastructure projects shifted from the federal government to the private sector that require federal permits regarding such things as navigable waters, sensitive habitats, and wilderness areas.

“No one objects to the idea of review,” Coleman said, adding that President Barak Obama expressed frustration when the American Recovery and Reinvestment Act ran into a NEPA wall. At the time, reviews took about three and a half years, Coleman said.

With Congress agitating to similarly hit the gas on an economic recovery from the pandemic fallout, streamlining the review process to two years is a good first step, said ConservAmerica’s Brent Fewell.

“It’s very easy to slow and stop projects using NEPA,” he said. “You can understand 99.9 percent of the environmental impacts and alternatives that exist to reduce those impacts within a two-year window. But because groups use NEPA to litigate and slow a project, it’s become a weapon of choice.”

It’s not just oil and pipeline projects, though, that are caught in the snare.

“Renewable energy projects have died under the lengthy NEPA reviews,” Fewell said. “Many of the large projects that are being delayed to death have environmental benefits.”

The developers of a proposed offshore wind farm called Cape Wind on Nantucket Sound finally pulled the project after 16 years of delays. The facility was projected to generate 1,500 gigawatt hours of electricity a year from wind.

The Intercounty Connector highway in Maryland that connects Montgomery County with Prince George’s County and pulls vehicles off the immensely congested Capital Region Beltway was finally built 60 years after it was first proposed after opponents stalled the project for decades.

Coleman said it takes time for agencies to do reviews that will stand up to judicial review. But in every NEPA case considered by the U.S. Supreme Court, the federal government has prevailed. Still, appellate courts have essentially made their own laws.

“The Supreme Court has been consistent that the federal government is doing plenty and the lower courts are required federal agencies to do too much,” Coleman said.

Trump’s reform will not prevent court cases, but the shortened review periods mean that administrations could defend their own actions.

“If they want new infrastructure, it’s only going to be done because of reforms.”