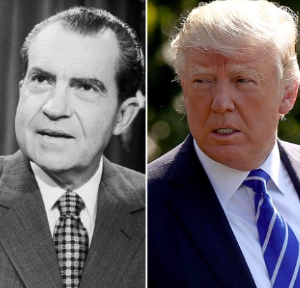 SEOUL — Is President Donald Trump capable of creating a “doctrine”? Can we dignify any of his utterances with the word, “doctrine”? Thae Yong-ho, the former North Korean deputy chief of mission at its embassy in London, has come up with just that term to describe Trump’s policy toward North Korea. He even compares the nascent “Trump doctrine” with the “Nixon doctrine.”

That’s bad news. I was following President Richard Nixon around East Asia in mid-1969 after he proclaimed the “Nixon doctrine” during a stopover on Guam. From there Nixon flew to Manila and then Saigon, where he met the president of the South Vietnamese regime, Nguyen Van Thieu, whom he pronounced one of the world’s “four or five” greatest leaders.

That bit of flattery was by way of ramming through “Vietnamization,” turning the war over to the South Vietnamese, withdrawing U.S. troops, stopping the bombing of North Vietnam and going into “peace” talks in Paris with the North. Those talks sputtered on until Nixon’s secretary of state, Henry Kissinger, signed the “Paris peace” in January 1973, agreeing to withdraw the last Americans and leaving the South Vietnamese to fend for themselves. The result was victory for the North in April 1975, after which there was no “North” and “South” Vietnam, just one Vietnam.

So what’s the “Nixon doctrine” have to do with the “Trump doctrine,” if indeed there is one? The answer, as Thae explained it at the Seoul Foreign Correspondents’ Club, is that Trump when he sees Kim Jong-un in the Vietnamese capital of Hanoi may come up with a formulation that’s good for the United States and North Korea but not for South Korea. The Trump Doctrine, said Thae, will stop the nuclear threat against the United States but not against South Korea.

The inference is that Trump, like Nixon, would just as soon go back on “the South” — South Korea in Trump’s case, South Vietnam in Nixon’s.

If North Korea agrees not to fire long-range missiles bearing nuclear warheads against American targets, that should be good enough for Trump. Trump, of course, may not be aware of the existence of any full-blown “doctrine.” Nor would he acknowledge coming up with a formulation that South Koreans would view as betrayal.

Realistically, however, Kim is not going to give up his nuclear program. Nor is Trump going to insist on it.

Alarmingly, Stephen Biegun, in his first diplomatic post, is the one who’s negotiating pre-summit with the North Koreans. That’s like throwing an amateur into the ring with a veteran prize fighter. Kim Yong-chol, vice chairman of the Workers’ Party, of which Kim Jong-un is chairman, has been scheming against the Americans and South Koreans his entire career. As North Korea’s intelligence chief, he was responsible for the sinking of the South Korean warship Cheonan in which 46 sailors were killed by a torpedo fired by a mini-submarine.

Trump, as Thae observed, should demand not only complete denuclearization but also North Korea rejoining the nuclear non-proliferation treaty and the International Atomic Energy Agency. It’s doubtful Trump will be worrying about those details while Kim asks him to ease up on sanctions, withdraw some of the 28,500 U.S. troops from South Korea and, yes, please cancel military exercises as he did after their summit in Singapore last June.

So what’s Kim likely to give in return? The answer is not a lot. The question is what will he appear to be giving and how will he get out of any real commitment as he did after the Singapore summit when he ordered destruction of a nuclear test site that had already been largely destroyed in the North’s last nuclear test in September 2017.

With his economy in a shambles, hit by sanctions, Kim is waging a negotiating war of attrition. He’s already got South Korea’s President Moon Jae-in agreeing to a no-fly zone that will make it difficult for U.S. planes to operate as far south as Pyeongtaek, where the United States has concentrated its forces 65 kilometers south of the DMZ.

Oh, and Kim also wants an end-of-war declaration that Moon thinks would be great. As Thae noted, that would mean demanding dissolution of the U.N. Command that has been in charge of U.S., South Korean and allied troops since the Korean War. In negotiations with Trump, Kim is gaining tactical and strategic advantage without having to fire a shot or risk a life.