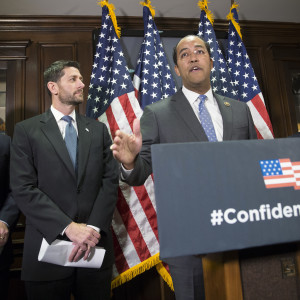 This year’s expected congressional rematch between Republican Rep. Will Hurd and Democrat Pete Gallego, the lawmaker ousted by the Texas freshman in 2014, is exactly the kind of contest Democrats say Donald Trump could tip their way.

“I can’t think of a bigger gift to the Pete Gallego campaign than Donald Trump being the Republican nominee,” said Anthony Gutierrez, a Gallego spokesman.

Trump’s negative comments on immigration have definitely had an impact, Gutierrez told InsideSources, in the sprawling 23rd Congressional District, a which stretches 500 miles along the Texas border from the outskirts of El Paso to the suburbs of San Antonio.

“It is a 70 percent Latino district. I don’t think there is a Latino part of Texas 23 you could go to where people are saying nice things about Donald Trump. There’s just no way that would be helpful.”

Campaigns across the country are weighing the impact of Donald Trump or Texas Sen. Ted Cruz at the top of the Republican ticket next fall — a possibility that has many Democrats optimistic — even gleeful.

Senate Minority Leader Harry Reid joked Wednesday that he’s pulling for Trump to win the GOP presidential nomination, before backpedaling on the Senate floor: “There’s some things I shouldn’t joke about. The danger of a Donald Trump candidacy to our country is not a joke.” 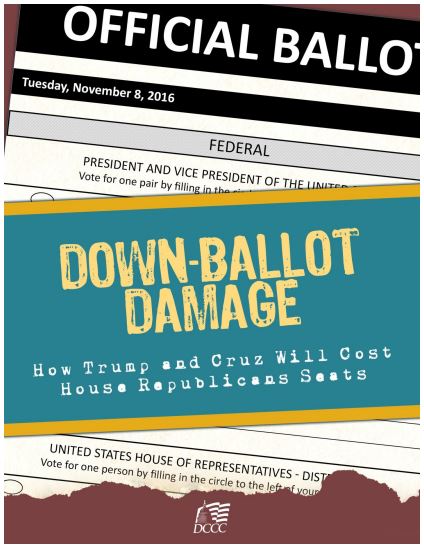 But the surprising national rise of Trump and Cruz to the forefront of the crowded GOP presidential field is being presented, at least for now, as an opportunity on the state and local level for Democrats, who put out a report Wednesday entitled “Down-Ballot Damage: How Trump and Cruz will cost Republicans House Seats.”

Trump’s anti-illegal immigration comments and Cruz’s strict social conservatism have already “irreparably” damaged the GOP brand and motivated the Democratic base, according to the report, which was created by the Democratic Congressional Campaign Committee, the campaign arm of House Democrats.

Gutierrez, a San Antonio native who has worked on multiple Gallego campaigns, including the 2014 race that was decided by less than 2,500 votes, agrees with the forecast.

“If Donald Trump’s on the ticket, it’s motivation for a lot of Latinos to get out and vote against Trump — and I think those are votes against Will Hurd as well,” Gutierrez said.

Hurd campaign spokesman Justin Hollis, dismisses talk of any particular candidate — from either party — at the top of the ticket having an impact in Texas 23.

“At the end of the day, people can say what they want, but Texas is not a battleground state,” Hollis said. “Hillary Clinton, or Bernie Sanders or whoever it is on the Republican side, is not going to be sending mail or doing TV in Texas next November. So, sure, there’s going to be a lot of stuff on the news about all these races and who’s voting for who, but that national news and that national messaging just filters into Texas a lot less than it does in other places.”

Hurd, a 38-year-old former CIA agent, is one of only three African-American Republicans in Congress (South Carolina Sen. Tim Scott and Utah Rep. Mia Love are the others), and with his youth and intriguing background as a spy, Hurd’s often been pegged as a rising GOP star.

Republican groups like the National Republican Congressional Committee and the Congressional Leadership Fund, associated with former Speaker John Boehner, spent millions to help Hurd’s 2014 campaign, and in his first year in office the freshman set a torrid pace for fundraising himself, socking away over $1 million for his re-election effort, more than twice what Gallego reported on hand at the end of September, when the Democrat filed his last report.

“Pete Gallego just can’t keep up right now,” Hollis said. “He’s not raising money at nearly the same clip as we are.”

Hurd has been embraced on Capitol Hill by House GOP leaders — Boehner gave the freshman a rare subcommittee chairmanship and Boehner’s successor, Paul D. Ryan was in San Antonio last week campaigning alongside the Texas congressman — but Hurd’s experience with terrorism and national security issues are also raising his profile.

The San Antonio native penned an op-ed in the Wall Street Journal on Tuesday decrying the lackluster federal response to a massive data breach that may have exposed networks throughout the government.

“The leadership has helped, both speakers have helped. We’re in a climate right now where ISIS threatens the security of our country and other countries and our allies around the world, and Will has a unique background in the CIA,” Hollis said. “This is what he did for 10 years, he chased terrorists down and dealt with them. We have that messaging. He also has the benefit of being a freshman that holds a gavel on the subcommittee for information technology with a cyber-security background. Those two things have put him on the radar.”

But Gutierrez said Gallego has an advantage in Texas 23 over Hurd that money can’t buy.

“We will raise the amount of money that we need in order to fully fund our campaign. I don’t know that we need to catch up to where [Hurd] is. In 2012, we were outspent, 2014, we were outspent, came within under 2 percentage points of winning. There’s going to be a ton of the big Republican billion-dollar super PACs out there that are going to spend heavily here,” Gutierrez said. “But Pete has a lot of advantages that make it a little bit easier for us to run a campaign that doesn’t require us to spend as much as I think Will will have to spend. Pete has been an elected official for two decades in this area. He’s extremely well known. He pulls crossover support … in a way that no other elected official or candidate in Texas is able to do. We’re going to get where we need to get with the money, but the 20-plus years that he’s had as an elected official counts for quite a bit alone.”

Hollis agreed the race — which is likely the one truly competitive 2016 congressional contest in the state, according to the Cook Political Report ratings — would prove expensive. But not because of the Republican or Democratic names at the top of the ticket.

“There’s going to be plenty of money spent on both sides of this campaign and through the national groups to identify both people in this race. I don’t think the national politics is going to hold much sway after that,” he said. “We didn’t worry about the governor’s race or Senate races or any other races last time. Whoever the nominees are on both sides, doesn’t matter to us. We’re running our own race.”