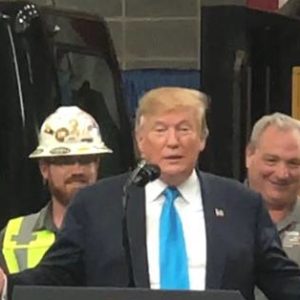 Point: Trump Is Absolutely Correct to Withdraw From the Paris Climate Agreement

Editor’s Note: For another viewpoint, see Paris Withdrawal Is Being Sold With a Lie

One number is needed to illustrate the absurdity that is the Paris climate agreement: 0.17 degree Celsius. That is the temperature reduction in 2100 attendant upon the Paris greenhouse gas emissions reduction, which is the simple sum of the promises (“Nationally Determined Contributions”) made by the participating countries. The U.S. contribution to that “achievement”: 0.015 degree Celsius. These figures are the modeling results using the U.S. Environmental Protection Agency climate model. There is no dispute about them.

That global 0.17 degree Celsius includes the ostensible effects of the Obama 2015 pseudo-agreement with China, if it is meaningful. (It is not.) The Chinese promise that their greenhouse gas emissions will peak “around 2030.” How high will that peak be? No one knows. What will their emissions be after the peak? No one knows. What will happen if, or when, their emissions continue to rise after “around 2030”? Actually, we do know the answer to that: nothing.

A full implementation of the Paris agreement would impose annual costs of at least 1 percent of global GDP, or $850 billion or more per year, inflicted disproportionately upon the world’s poor. (That is why there is a Green Climate Fund, which exists far more in theory than in fact.) Has anyone anywhere conducted a benefit/cost test under which the agreement makes any sense at all?

After all, substitutes for fossil fuels are vastly uncompetitive — the international evidence on that is incontrovertible — notwithstanding the laughable claims that wind and solar power now are “competitive,” assertions that ignore the massive subsidies, guaranteed market shares, and costs of backup generation and longer transmission systems. (It is no accident that power costs in California now are the highest in the lower 48 states.) And such substitutes are almost entirely a first-world luxury; for the most part, poor countries will respond to higher energy costs simply by consuming less. The proponents of the Paris agreement want to pretend that doing with less is costless because the value of forgone energy consumption does not show up in the national income accounts. The rest of us need not be so silly: Expensive energy means more poverty.

But, you say: Is there not a looming crisis?

Well, no. There is no evidence — none — in support of the “crisis” (or “existential threat”) view of anthropogenic climate change. Temperaturesare rising, but as the Little Ice Age ended around 1850, it is not easy to separate natural from anthropogenic effects on temperatures. The latest research in the peer-reviewed literature suggests that mankind is responsible for about 0.5 degree Celsius of the global temperature increase of about 1.5 degree Celsius since 1850. I summarize the evidence on a series of climate phenomena here.

Put aside the reality that the agreement does not and cannot contain a mechanism to enforce the “Nationally Determined Contributions.” More important, the NDCs cannot be taken seriously because almost all are promised  greenhouse gas emissions cuts relative to a “business as usual” baseline, that is, relative to a future emissions path unconstrained by any policies at all. Since emissions are closely correlated with economic growth, a nation can “fulfill” its promise by assuming excessive economic growth; when actual growth proves lower, the same will be true for greenhouse gas emissions. Thus will the “commitments” be met without any actual change in underlying emissions behavior at all.

Not to worry, say the proponents: The agreement puts in place “monitoring,” a review process, and recalibration of targets every five years. That means, obviously, that the initial promises might not be met; precisely how is it that the revisions five years hence, and five years after that, ad infinitum, will prove any more meaningful than the original “landmark” Paris promises?

What is blatantly obvious is that this “review” process has nothing to do with emissions reductions; it is instead a full-employment act guaranteeing into the indefinite future endless meetings and U.N. Climate Change Conferences at luxury resorts for the international climate bureaucracy, academics, foundation staffers, politicians, celebrities and others for whom climate policy is a godsend. As an aside, the “monitoring” is to be done in part with satellite surveillance; am I alone in noticing the Big Brother flavor of this exercise?

Because the central ideological goal of the climate industry is an elimination of fossil fuels, the planet will never be saved and the goalposts will be moved continually.  Accordingly, the Paris agreement is silly and destructive as a strategy to engender environmental improvement, but it works beautifully as a mechanism to transform the climate industry into a perpetual motion machine.

President Trump is wise to reject it.