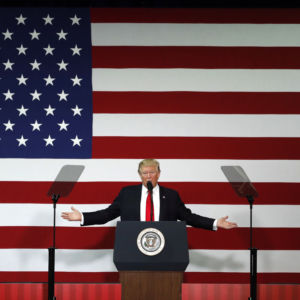 President Donald Trump outlined his goals for comprehensive tax reform Wednesday ahead of what is expected to be a tough policy fight.

Republicans are gearing up for a major push to fundamentally overhaul the tax code. They have held hearings while making the case for why tax reform is so important. The tax system has not been reformed in any significant way since 1986. Trump gave an overview of his goals during a speech in Springfield, Missouri.

“I want to work with Congress, Republicans and Democrats alike, on a plan that is pro-growth, pro-jobs, pro-worker, and pro-America,” Trump told a crowd of supporters. “There is no more fitting place to launch this effort than right here in the American heartland surrounded by hardworking men and women whose skills, determination, and drive are truly second to none.”

Trump added that comprehensive tax reform is the foundation to his job creation agenda. He touted a recent increase in economic growth as a sign his economics-focused agenda is starting to work. Trump also called out Congress for failing to repeal or replace the Affordable Care Act.

“This is our once in a generation opportunity to deliver real tax reform for everyday, hardworking Americans,” Trump said. “I’m fully committed to work with Congress to get this job done, and I don’t want to be disappointed by Congress. Do you understand me? Understand, Congress? I think Congress is going to make a comeback. I hope so.”

Trump outlined four main goals he hopes to accomplish during the tax reform push. He wants the tax code to be simplified, corporate rates to be reduced, rates lowered for middle income workers, and offshore profits reclaimed. He argues the tax code has become increasing less competitive internationally since 1986.

“We need a competitive tax code that creates more jobs with higher wages for Americans,” Trump said. “Ronald Reagan led the world by cutting our corporate tax rate to 34 percent. That was below the average rate for developed countries at the time. Everybody thought that was a monumental thing that happened. But then under this pro-America system, our economy boomed.”

Trump adds that other countries saw the economic growth and started lowering their rates which made them more competitive over the years. He is hoping to reduce the current corporate tax rate down to 15 percent. He adds that lowering rates for everyday Americans will also help spur economic growth.

Republicans have been vocal advocates for tax reform over the years. The election last year opened up a new pathway to actually getting comprehensive tax reform done. Republicans now have the presidency along with both congressional chambers.

The White House released an early summary of its tax reform plan this year. House Speaker Paul Ryan and Rep. Kevin Brady introduced a blueprint last year which detailed many of the same provision. Both plans are designed to simplify the tax code and reduce both corporate and individual rates.

“Republicans have been engaged in this process for quite some time,” National Taxpayers Union senior fellow Mattie Duppler told InsideSources. “The better way blueprint was one of the more significant steps forward in terms of putting meat on the bone for tax reform. But now it’s time for real progress.”

Republican leaders have held hearings and released detailed outlines of what they hope to achieve. The House Ways and Means Committee discussed the need for tax reform during a hearing in May. Business leaders testified that effective tax reform could help spur economic growth.

“It’s making progress in that there seems to be focus on it as an important priority,” Jeff Kupfer, professor of public policy at Carnegie Mellon University, told InsideSources. “But there’s also a lot going on, obviously, on other issues around the country so the attention towards tax reform is diverted from where it could be.”

Kupfer formerly served on a panel focused on federal tax reform under former President George W. Bush and worked as an official with the U.S. Treasury Department.

The National Taxpayers Union Foundation found in a 2015 study that the economy loses $233.8 billion and 6.1 billion hours of lost productivity annually because of the complex tax code. The Congressional Budget Office found in an analysis that the current tax code is becoming increasingly less competitive worldwide.