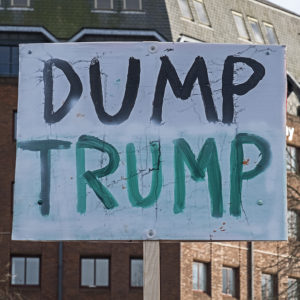 The incoming Democratic Congress hates lame duck President Donald Trump so much that it’s willing to gut the Constitution of the United States; to destroy the liberties of everyone, no matter one’s party. Recently, as we are in the last days of the Trump presidency, the Democrats in Congress announced a new impeachment of Trump for his role in the Capitol Hill riots that stopped a critical meeting of Congress.

Trump, just as the assault was beginning, told a giant meeting of his followers outside the White House that the election was rigged and he had actually won a landslide. That seems wrong to me, but I do believe there were voting irregularities in some states that should be investigated. These include officials other than state legislators changing rules of voting. The Constitution charges state legislatures with establishing voting rules. Did that change the outcome of the election? Don’t know. But Congress should look into it. Still, in lieu of that, the ethically challenged Joe Biden will become president in a few days. Last week Trump told his followers to go to the Capitol and “peacefully and patriotically” protest. Trump never said to violently act.

But that didn’t matter to hundreds of Democrats in the House of Representatives who, in a mockery of a quasi-judicial proceeding created to remove federal officials for major crimes, voted a bill of impeachment in just one day. They never offered any evidence other than their speeches about how much they hated Trump. They railed on and on about what a horrid person their chief political enemy is. They argued that anyone who spoke in Trump’s behalf should be thrown out of Congress. They never mentioned that impeaching Trump would ensure that their worst nightmare could never happen: That Trump might run again in 2024.

The lawless Democrats rushed through a one-count impeachment measure in just one day. It reminds one of Kafka’s “The Trial” or Humphrey Cobb’s “Paths of Glory. The latter is a story of a rigged court martial of French soldiers during World War I. Whether one likes Trump or not—and I have mixed feelings about his presidency—the message these Democrats are sending is their snap impeachment—normally it takes weeks to present an impeachment case in the House, then a few weeks more to hold a trial in the Senate—is a disgrace.

But it is worse.

Since the Democrats are trying to impeach Trump in the last days of his term, and since the leaders of the Republican controlled Senate have said there is no time to hold a trial, these power mad Democrats are in effect saying, “to hell with the rule of law.” The Democrats will gain control of the Senate in a few days and they have said they intend to hold an impeachment trial of Trump even though he will no longer be president.

Here’s where the lawlessness is palpable.

The Constitution clearly states impeachment can only be used against federal officials; it doesn’t apply to private citizens. Article II, Section 4 states who can be impeached. “The president, vice president and all civil officers of the United States, shall be removed from Office on Impeachment for, and Convictions of Treason, Bribery and other High Crimes and Misfeasors.”

Congress has no power to impeach someone who is no longer a federal official. And, by the way, Article 1, Section also prohibits Congress from passing a “Bill of Attainder or ex post facto law.” To accept this Democratic Party standard of “we’ll get Trump even if we have to break the law to do it,” is to go down a dangerous road. It’s called the road to lawless government; the road to temporary majority can do anything it wants, with no limits and to hell with the Constitution. Indeed, some Democrats are already talking about changing the most basic freedom of our society: The first amendment of the Bill of Rights.

Does obeying the law mean that Trump, or any other ex-president, can get off scot free from criminal acts committed during his presidency?

It does not. Ex-presidents are still subject to all the criminal laws that affect every other citizen.

The greatest danger here is, if the Democrats succeed, impeachment will be a blatantly partisan weapon. And, by the way, this was something that was tried by the Jeffersonian party in the early 19th century against Federalist judges. It was a weapon that blew up in the faces of the Jeffersonians as it very well could do for Democrats today. If a Democratic Congress can impeach a former president who is a Republican, then let’s consider the implications. Why stop there? Indeed, if the Republicans regain control of Congress, which they might do in two years, they could go after ex-presidents who are Democrats. They could raise questions about some of the controversial policies of Presidents–but now private citizens–Obama and Clinton.

“Where does it stop?” asked Senator Lindsey Graham.

It stops when both parties start respecting the basic law of the land, the United States Constitution.