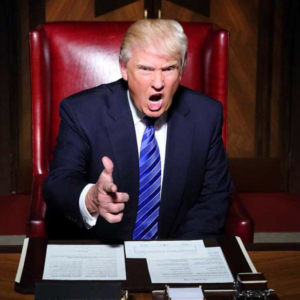 Republican president-elect Donald Trump’s upset victory over Democratic former Secretary of State Hillary Clinton leaves nothing but question marks in Washington this morning behind the futures of a number of high-profile technology issues.

Though the business mogul never drafted a specific policy platform on tech, Trump, who notably has never used email, did take public stances on key issues including cybersecurity, net neutrality, encryption and surveillance that may provide a glimpse of where his administration will come down as their import grows in our increasingly connected society.

In September, Trump told a crowd in Philadelphia that after taking office, he would immediately order a review of all U.S. cyber defenses and vulnerabilities, including over critical infrastructure like power plants often mentioned by cybersecurity experts, defense and intelligence officials.

His review team would include those experts from the private sector and military officials alongside representatives from law enforcement, who Trump told veterans in October would provide specific strategy recommendations and customized tech for certain targets and mandatory cyber awareness training for federal employees.

Another team headed by the Department of Justice would coordiante threat response between federal, state and local governments and Trump would order the secretary of defense and Joint Chiefs of Staff to recommend new defense and offensive capabilities for U.S. Cyber Command aimed at deterring threats from “especially China, Russia, North Korea along with non-state terrorist actors.”

The broad, generalized prepared remarks differed from Trump’s more off-the-cuff remarks on cybersecurity, including during the first presidential debate in September, when Trump doubted the consensus of top defense and intelligence officials that Russia was behind the hack of Democratic National Committee and Democratic Congressional Campaign Committee email accounts.

“As far as the cyber, I agree to parts of what Secretary Clinton said,” Trump said. “We should be better than anybody else, and perhaps we’re not. I don’t think anybody knows that it was Russia that broke into the DNC. She’s saying Russia, Russia, Russia — I don’t, maybe it was. I mean, it could be Russia, but it could also be China. It could also be lots of other people. It also could be somebody sitting on their bed that weighs 400 pounds, okay?”

At the height of the FBI’s legal battle with Apple to compel the iPhone maker to undermine its own end-to-end encryption and provide a back door for law enforcement surveillance, Trump attacked the company in February for refusing to help law enforcement break into the iPhone of one of the ISIS-inspired San Bernardino shooters and called for a boycott on Apple products.

“Apple ought to give the security for that phone, okay. What I think you ought to do is boycott Apple until such a time as they give that security number. How do you like that? I just thought of it. Boycott Apple,” Trump said.

“The phone’s not even owned by this young thug that killed all these people. The phone’s owned by the government, okay, it’s not even his phone,” he continued. “But [Apple CEO] Tim Cook is looking to do a big number, probably to show how liberal he is. But Apple should give up, they should get the security or find other people.”

In response to Islamic radicalization online Trump suggested shutting off portions of the internet in some unspecified way last December, raising alarm bells in social justice and privacy circles over his threat to free speech and expression who drew parallels to regimes in China, Russia, North Korea and Egypt with a policies and histories of censorship and internet outages to control the flow of information and political activism.

While Trump didn’t address net neutrality on the campaign trail, he posted a tweet in November 2014 after President Obama called on the Federal Communications Commission to adopt strong net neutrality rules, which he said would “target conservative media,” though he declined to elaborate on how the rules mandating all internet traffic be treated the same would do so.

“Obama’s attack on the internet is another top down power grab. Net neutrality is the Fairness Doctrine. Will target conservative media,” he wrote.

Jeffrey Eisenach, a Trump transition team adviser, said on C-SPAN over the weekend Trump would likely appoint an FCC commissioner with the intention of repealing the rules implemented by Democrat Tom Wheeler.

“Taking his broader views on regulation into account, you would expect him to appoint to the FCC [a chairman] who would be inclined to take a less regulatory position,” Eisenach said according to Politico.

Trump has taken a decidely anti-Silicon Valley stance on a number of other issues, opposing the recent transition of internet oversight to the global community, rejecting the push by many tech companies like Facebook and Google for more H-1B visas for highly skilled immigrant workers, accusing Amazon of antitrust and tax violations, and vowing to oppose the recently proposed AT&T-Time Warner merger not even Netflix is against.

The president-elect received limited campaign donations from the valley compared to Hillary Clinton’s millions, making it unlikely Trump is willing to do any favors for tech over the next four years. But venture capitalist Peter Thiel, who faced criticism from others in the tech community, will likely have Trump’s ear as a result of his outspoken support during the campaign.