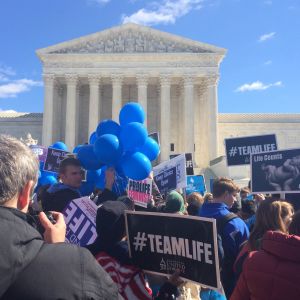 Anti-abortion demonstrators outside the Supreme Court on Wednesday morning.
News

Some of America’s leading anti-abortion activists are struggling to embrace presumptive Republican presidential nominee Donald Trump, a politician who ostensibly converted to their cause but continues to praise the nation’s largest abortion provider.

Speaking to InsideSources at a Wednesday demonstration outside the Supreme Court, the activists reacted to Trump’s comments from one day earlier, when he said Planned Parenthood “has done very good work … for millions of women.”

The Manhattan business mogul, who called himself “very pro-choice” and even supported late-term abortion in 1999, has said he now opposes the controversial procedure and government funding for it. But that didn’t stop him from defending Planned Parenthood on Tuesday, dismissing criticism from “so-called conservatives.”

Trump’s stance was met with a mix of apprehension, distrust and outright demoralization on the part of pro-life activists, gathered outside the nation’s highest court as it considered a major case on regulation of abortion clinics.

Asked if she was confident the mogul would oppose abortion rights in the White House, National Right to Life Political Director Karen Cross initially said only, “I pray that he would. We have to take him at his word.”

When InsideSources noted that she didn’t sound particularly confident, Cross replied, “I don’t know how to answer that. I’m sorry.”

Another Right to Life staff member then intervened in the conversation, reminding his colleague that Trump had pledged to sign anti-abortion legislation if it arrived on his desk. “Absolutely,” Cross said quickly, turning back to InsideSources. “I feel confident in that, so you could change that.”

Other activists on the courthouse steps made no effort to mask their concern.

Stone talked openly about coworkers agonizing over the Trump, whose Planned Parenthood support infuriates them. Acknowledging her candor about the situation, she smiled and said, “These are not the talking points.”

Stone’s predicament is easy to understand. Supporting a pro-abortion rights Democrat is a nonstarter, but sitting out an election isn’t an option. She’s telling her voters “to do what they’re comfortable with morally.”

“It’s just going to be tough no matter how it goes,” Stone said. “There’s not a good answer on this, and it’s very unsettling.”

Among Wednesday’s demonstrators not formally affiliated with advocacy groups, there was evidence that both sides of the abortion debate see Trump as dishonest.

“He’d probably do whatever benefited him most, which is the opposite of what you want in a leader,” said Jessie Sebbo of Atlanta, Georgia, a fellow abortion supporter who came dressed in a pink and purple uterus costume.

The question is whether Republican voters will actually punish Trump for his position. He frightens Washingtonian Donna Bethell, but she’s more scared of Democratic front-runner Hillary Clinton. Bethel said she believes the former first lady is a criminal. Given the choice between the two, in spite of the abortion issue, Bethell told InsideSources she’ll support Trump.

“A madman or a crook,” she said with a look of bemusement. “What a choice.”