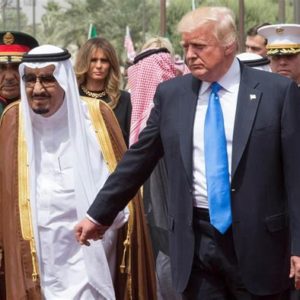 The brazen potential kidnapping, or even murder, of Saudi journalist and dissident Jamal Khashoggi in the Saudi Arabian consulate in Istanbul, Turkey, should be a wake-up call in the U.S. relationship with Saudi Arabia — much as the suspected Russian use of a chemical weapon on British soil to attempt to murder a former Russian spy should have been in the case of Russia.

Yet in both cases, President Trump continues to play footsy with such dictators.

Although in both cases, the U.S. foreign policy and defense establishment has mitigated Trump’s inclinations with a more nuanced policy, the overall administration policy is still too chummy. Similar to his destruction of important political norms at home, Trump only tepidly responded in the face of Saudi Arabia’s violation of international diplomatic norms by likely committing nefarious deeds under the shelter of the immunity of its own consulate.

Although the Trump administration kicked out some Russian diplomats in solidarity with Britain after the chemical poisoning of Sergei Skripal and his daughter with the powerful nerve agent Novichok, that didn’t stop Trump from obsequiously kowtowing to Russian President Vladimir Putin a few months later at the Helsinki summit.

Both Saudi Arabia and Russia have abysmal human rights records and have committed other even more important transgressions. Back in 2001, the Saudi government had mysterious links to the al-Qaeda terrorists who committed the 9/11 attacks — 15 of 19 of which were Saudi nationals.

In addition, the Saudi government, with U.S. support, is conducting a brutal war in Yemen that is wantonly killing civilians. Putin’s government in Russia hacked the U.S. election in 2016 and distributed information on Trump’s opponent to help him win and is accused by U.S. intelligence agencies of continuing to attack the 2018 electoral contest.  Putin has also meddled in European elections; intervened in Syria’s civil war to rescue Syrian dictator Bashar al-Assad; destabilized Ukraine; and invaded and annexed Crimea.

The United States has always trod carefully around Saudi Arabia because the U.S. government has always believed — erroneously — that the country controlled, through the OPEC cartel, world oil supplies and prices. Yet economists note that resource cartels, including OPEC, have been unsuccessful in controlling the price of their product over the long term. That’s because when the market price of the commodity goes up, countries in any cartel, to make more money, have an incentive to cheat by overproducing their quota, thus lowering the price.

Also, there may exist — as in the oil market — non-cartel producers that also erode the cartel’s power. For example, since the petroleum fracking boom in America, the United States has again become the world’s largest oil producer. Thus, the United State no longer has any reason to pander to Saudi Arabia, if it ever did. Trump may be doing so simply because Saudi Arabia, knowing Trump’s susceptibility to flattery, threw him an extravagant bash when he toured there after becoming president.

Trump’s pandering to Russia — against the inclinations of the U.S. foreign policy and defense establishment and in the face of continuing Russian election meddling — is perplexing. As a businessman, many buyers into Trump real estate projects seemed to have Russian links, some shady. Even more important, a company linked to Russian intelligence — BayrockGroup — had offices in Trump Tower and provided funding for Trump’s projects after banks refused to lend him money in the wake of his casino bankruptcies in Atlantic City.

The United States need not be intrinsically hostile to Saudi Arabia or Russia, but neither should Trump pander to either country, as he has done. He should loudly protest Khashoggi’s disappearance from the Saudi Arabian consulate and urge a thorough investigation; also, he should take greater measures to safeguard U.S. elections from future meddling by Russia and other nations and develop enhanced offensive cyber tools to deter such interference.

Although the United States should not advocate or attempt regime change in any foreign nation, it has no need to coddle such dictators and human rights abusers either.