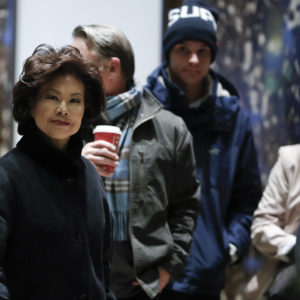 President-elect Donald Trump’s minuscule support from Silicon Valley compared to his general election opponent hasn’t dissuaded him from throwing a booming part of the tech sector some love, his choice for transportation secretary shows.

This week Trump named as his pick to head the Department of Transportation Elaine Chao, who brings eight years of cabinet experience to the Trump White House from her time as labor secretary throughout the entire George W. Bush administration. Chao also has experience in the Transportation Department, where she acted as deputy secretary for the George H.W. Bush administration. The nominee is married to Republican Kentucky Sen. Mitch McConnell, the majority leader of the Senate, where she’ll face a confirmation hearing.

Chao will be charged with heading up a crucial revamp of decaying and failing transportation infrastructure across the country. Her selection also sends a friendly sign to a booming sharing economy sector of the transportation market centered in Silicon Valley, where Trump saw little traction during election season as a result of his contentious views on certain tech issues.

“Literally millions of people today participate in the digitally-enabled, peer-to-peer economy,” Chao said at an American Action Forum event last November in a speech discussing the sharing and gig economies. “So it is legitimate to ask if the regulatory solutions of the past– crafted by big government for big business– are appropriate for a peer-to-peer economy that is fluid, flexible and filled with workers who prefer independent arrangements.”

Chao said American workers no longer spend “the majority of their lives in one establishment or one profession,” and advocated loosening decades-old regulations governing how companies treat workers.

“Most of the major laws creating these programs were enacted during the depression era, the 1950’s or the 1970’s,” Chao told attendees. “At the time, they addressed important social issues such as child labor, industrial accidents, and the need to strengthen union democracy. But the Fair Labor Standards Act of 1938, which created the 40 hour workweek among other key reforms, is 77 years old. The Landrum Griffin Act mandating union financial transparency is 56 years old. The Occupational Health and Safety Act of 1970 is 45 years old. And the pension protection law commonly known as ERISA is 41 years old.”

Highlighting statistics from some of the biggest names in the peer-to-peer economy including Uber, Etsy and Airbnb, Chao said more than half of those in the former two are college educated and use the platforms for supplementary income, while the latter helped hundreds avoid foreclosure.

“Nearly half of the Uber drivers surveyed had a college degree or higher. 62 percent had another full-time or part-time job. Nearly half had health insurance coverage through another job, spouse or family member,” Chao said. “A 2012 company survey found that– much like Uber– more than half of Etsy’s sellers are college educated.”

“Ninety percent of Airbnb participants rent rooms in their primary residence. In July 2010, the company received 300 letters from homeowners who said they were able to avoid foreclosure because of the extra income derived from Airbnb rentals,” she added.

The speech highlights the ongoing debate between gig economy companies and workers, who are fighting for employee benefits like healthcare from companies like Uber, who consider them private contractors and ineligible for benefits. Chao’s argument for a reevaluation of many of the laws mandating those protections suggest her policies may be more sympathetic to companies than legal challeneges brought against them.

“The digitally-enabled, peer-to-peer economy has provided an important safety net for many families during difficult times,” she concluded. “At a minimum, government policies must not stifle the innovation that has made this sector such an explosive driver of job growth and opportunity.”

“Ms. Chao’s knowledge of transportation issues is extensive, and we look forward to working closely with her,” Niki Christoff, Uber’s head of federal affairs, told InsideSources in an email.

“We have the utmost respect for Elaine Chao, an accomplished public servant and highly capable leader,” Lyft spokesman Adrian Durbin said according to Bloomberg. “We congratulate her on the nomination and look forward to working with her on an array of transportation issues.”

Those issues will also include the regulatory green-lighting of artificial intelligence and autonomous vehicles, where technology is expected to progress rapidly in the next five years.

“In many ways, she may be the cabinet member with the most interesting and important tech policy issues out there,” Uber adviser Bradley Tusk said.