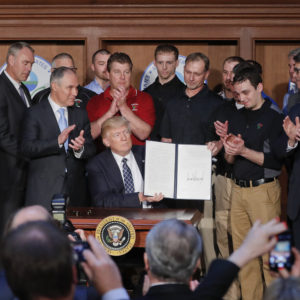 Since taking office, Donald Trump has quickly taken action in support of American energy. His early executive orders have targeted energy infrastructure development, with approval of the Dakota Access and Keystone XL pipelines. On Tuesday, he continued the trend, signing a landmark executive order to repeal the Clean Power Plan, which opponents of the regulation have argued was detrimental to American energy independence.

“The action I’m taking today will eliminate federal overreach, restore economic freedom, and allow our companies and our workers to thrive, compete, and succeed on a level playing field for the first time in a long time,” said Trump, going on to say that, “My administration is putting an end to the war on coal.”

Trump’s executive order lifts the ban on leasing federal land for coal production, removes restrictions on the production of oil, natural gas, clean coal, and shale energy. Most importantly, the order calls for the repeal of the Clean Power Plan.

The Clean Power Plan, which supporters call the lynchpin of Obama’s domestic policy on climate change, was crucial to achieving the goals of the Paris climate agreement. Obama planned to use the Clean Power Plan to meet his pledge to cut U.S. emissions by 26 to 28 percent by 2025 as part of the agreement. (Trump, on the other hand, has vowed to pull out of the climate accord.)

The Clean Power Plan regulates carbon dioxide emissions from electricity plants powered by fossil fuels. Although the rule applies to the industry generally, it had a particularly harsh impact on coal. Trump hopes that repealing the plan will spur job growth in mining, petroleum production, and the energy sector.

Paul Bailey, president and CEO of the American Coalition for Clean Coal Electricity, says that his organization is “very appreciative” of Trump’s order, particularly for the impact it will have on coal-burning electricity plants. Under the Clean Power Plan, about a sixth of American coal-fired power plants have been closed. Another sixth are currently being evaluated for potential closure, according to Bailey.

“We hope that Trump’s order will cause those coal plants to not retire,” said Bailey. “We think that coal plants are the most reliable source of baseload energy.”

Bailey acknowledged that, after Trump’s election, the industry had presumed that the Clean Power Plan would be repealed. Coal plants still face additional challenges, however.

“We hope that [EPA Head Scott] Pruitt will work to stop other EPA policies that are causing or will cause coal plant retirements in the coming years,” he said.

Implementation of the Clean Power Plan has already been paused for over a year, since the Supreme Court put a stay on the regulations pending the results of a lawsuit challenging the policy. Shortly after the Clean Power Plan was announced in 2015, twenty-seven states petitioned the U.S. District Court for the District of Columbia for a stay on the regulation.

Eventually, the stay was granted by the Supreme Court and the lawsuit challenging the EPA has continued. After the election, many officials were hopeful that the Trump administration would be more friendly to fossil fuels.

In December, 24 state attorneys general wrote a formal letter to the Trump transition team, as well as Speaker Paul Ryan and Majority Leader Mitch McConnell, suggesting steps the administration could take to withdraw the Clean Power Plan. Describing the plan as “an unlawful attempt to force States to fundamentally alter electricity generation in their States,” the letter argued that the legislation was unconstitutional and infringed upon states’ traditional ability to regulate within their own borders.

The letter went on to urge the administration not only repeal the rule but also to take steps to stay pending litigation under the rules.

“An executive order on day one is critical,” it said. “The order should explain that it is the Administration’s view that the rule is unlawful and the EPA lacks authority to enforce it.”

It went on to encourage Congressional leaders to consider drafting legislation that would prevent a similar rule from being adopted in the future.

“We believe it is important to provide a longer-term legislative response to the Rule to ensure that similar or more extreme unlawful steps are not attempted by a future EPA,” the letter continued. “Any such legislation should recognize the rights of States to develop their own energy strategies, so that energy can be generated in a cost-effective and environmentally responsible manner.”

Trump had promised to repeal the Clean Power Plan on the campaign trail. At the time, he criticized the plan, saying that it would “increase monthly electric bills by double-digits without any measurable improvement in the climate.”

Environmental groups have already spoken out against the president’s decision and organized an impromptu march outside the White House on Tuesday evening.