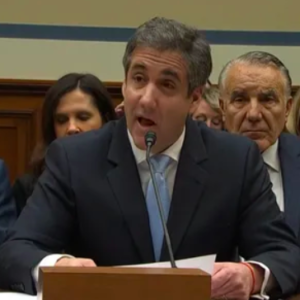 Michael Cohen’s testimony was marketed by many in the media as a “bombshell,” but based on conversations with Trump supporters in key early primary states, it barely left a mark on his base.

Cohen, the president’s one-time personal attorney, laid out a scathing indictment of Donald Trump’s personal behavior, but he also acknowledged that he had no evidence of collusion with Russia—the key issue at the heart of the Mueller campaign. And given that, as Republicans on the House Oversight Committee were quick to point out, Cohen is facing jail time for lying to the same Congress he was testifying before, many Trump supporters dismissed his testimony out of hand.

“Grassroots Republicans know that Cohen is a joke and nothing more than a low rent con artist,” Seth Weathers, a GOP political operative in Georgia told InsideSources.

Barbara Shealy, a grassroots Republican activist across the border in Columbia, SC, agrees.

“I could not care less what spews out of his lying, ‘It’s all about me’ mouth.  Mr. Cohen ruined his credibility a long, long time ago in the minds of many of my acquaintances and me.”

InsideSources spoke to Republican operatives and grassroots activists in the key early primary states of Iowa, New Hampshire and South Carolina, and the uniform reaction was that Trump supporters were unmoved by Michael Cohen’s allegations.

“Based on what I saw of the Michael Cohen testimony, I saw someone continuing a pattern of manipulation and fabricating answers to suit what the Democrats wanted him to say, all while providing unbelievable testimony to seek revenge on President Trump,” says Steve Stepanek, chairman of the New Hampshire state GOP.  “All of his answers were focused on bashing the President and he is simply not someone we can believe or trust.”

While many Trump supporters dismissed Cohen’s testimony out of hand, others acknowledged that some of his accusations may have been true. They just aren’t new.

“None of this [the president’s personal behavior] was hidden, even in the campaign, and people saw a lot of these issues at the time,” Rep. Jody Hice (R-GA) told InsideSources. “And still, the president has tremendous support in Georgia’s Tenth District.”  Hice sits on the Oversight Committee and grilled Cohen during the hearings about his interactions with Democrats before agreeing to testify. “I don’t think anything that was said or done in the hearing is going to impact that in the least. In fact, the tweets and texts I received were primarily expressing disgust with the Democratic Party and its hatred of the president—hatred so strong that they brought in a convicted liar to go after him.”

“The ultimate purpose of this hearing was all about impeaching the president. That issue is not going to go away and people need to be aware of that,” Hice said.

In South Carolina, home of the “First in the South” primary, Republicans overwhelmingly support President Trump and remain skeptical of attacks they see as motived by partisan politics.

“Cohen’s testimony is nothing but a pathetic last minute plea for forgiveness from radical liberals who still can’t accept a Trump presidency,” said R. J. May III, president of the conservative Ivory Tusk Consulting. “Michael Cohen is the real con man here. He admitted he lied to Congress before; now we’re supposed to believe this testimony given in the shadow of Cohen’s imminent departure to federal prison? That may work in New York, but South Carolinians ain’t buying it.”

In Iowa, Simon Conway hosts a conservative radio show in Des Moines and he says his callers were all but unanimous in rejecting Cohen’s claims and his credibility.

“One caller said that the Democrats know it’s a hoax, they’re just trying to throw mud. They’re hoping it will stick for the 2020 elections.”

If Trump opponents in the mainstream press were hoping that Cohen’s testimony would shock conservatives–particularly social conservatives–into questioning their support of the president, they’ve underestimated how much his supporters have accepted Trump’s character flaws as part of the political bargain.

Rep. Hice, who was a pastor before entering Congress, says the people in his district are grateful for the results of the Trump presidency and are, for the moment, overlooking the personal issues.

“The people I talk to in Georgia are grateful that we have a president who is doing what he said he’d do. He’s defending our country, rebuilding our military, standing for religious liberty and defending the values we hold dear,” Rep. Hice said. “I think a lot of people are looking beyond his past and saying ‘Thank you, Mr. President, for doing what you’re doing.’”

After three years of negative press, Russia investigations and allegations of criminality, President Trump’s approval rating among Republicans in Iowa, New Hampshire and South Carolina is at 80 percent—or higher. As long as he maintains that level of support, President Trump is in no real danger of a primary challenge.

As for the general election in 2020, President Trump is counting on Democrats moving too far left and overplaying their hand. In the opinion of many Republicans, Wednesday’s display during the Michael Cohen testimony shows Democrats are well on their way.