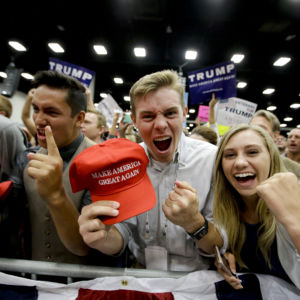 How Should Trump Opponents and the Media Approach His Sympathetic Voters?

There was a revealing moment on Bill Maher’s HBO show last week.

His political panel discussion was just getting started, but already conversation had turned to two of the liberal comedian’s favorite subjects. The first, of course, was the presumptive Republican nominee for president. (“I didn’t think I could hate him any more than I do,” the host said with a smile.) The second, and somehow more controversial, was what Maher has long regarded as the essential ignorance of the American people.

“Donald Trump is proving what I think a lot of us have realized over the past election cycles,” said Daily Beast columnist Michael Moynihan. “Americans believe a lot of stupid things, and it doesn’t mean we should indulge them in their stupidity.”

Although Maher was quick to endorse Moynihan’s comments, they didn’t sit well with another guest just a few feet away — Melissa Harris-Perry, the progressive Wake Forest University professor and erstwhile MSNBC host.

Pointing her finger at Moynihan, Harris-Perry told him, “When you say ‘Americans are dumb, Americans think dumb things,’ … it really does generate this kind of sense that ‘Oh, Mr. Trump hears me, and y’all — elite liberals — don’t.’ I think we have to be really careful about a discourse that sort of sets [people] apart. It creates a lane for him to drive right through.”

Trump has clearly found his lane in this election, and his primary victory is finally forcing some serious analysis of why he’s resonating. The question for Democrats and traditional Republicans is whether it’s possible to oppose Trump’s candidacy while appealing to his voters — specifically the white working class, which has been decimated by manufacturing job losses and other painful economic changes. At the most basic level, can they do more to extend these voters empathy amid growing talk of “white male privilege,” or is this entire project a fool’s errand?

The New Yorker’s George Packer was mulling this last month, writing that progressives’ politics of social justice have included “an aversion toward, even contempt for, their fellow-Americans who are white and sinking.”

“Abstract sympathy with the working class as an economic entity is easy,” he added, “but the feeling can vanish on contact with actual members of the group, who often arrive with disturbing beliefs and powerful resentments — who might not sound or look like people urban progressives want to know. White male privilege remains alive in America, but the phrase would seem odd, if not infuriating, to a sixty-year-old man working as a Walmart greeter in southern Ohio. The growing strain of identity politics on the left is pushing working-class whites, chastised for various types of bigotry (and sometimes justifiably), all the more decisively toward Trump.”

Wednesday brought new evidence of how this dynamic could harm likely Democratic presidential nominee Hillary Clinton in the general election. The Wall Street Journal reported on labor leaders continuing to worry that Trump is playing well in union households, traditionally a Democratic constituency.

President Barack Obama nodded to Trump’s appeal during a PBS town hall, talking about the nation’s economic recovery. “Even though we’ve recovered, people feel like the ground under their feet isn’t quite as solid,” he said. “If they’re feeling insecure, and they’re offered a simple reason to be more secure, people are going to be tempted by it.”

Some Democrats are heartened that White House hopeful Bernie Sanders has had great success with the white working class in his primary against Clinton, and there’s hope that the Vermont senator will be an effective surrogate to rally this group behind Clinton.

In contrast to all of this, however, there are voices dismissive of the idea that Trump’s supporters deserve too much empathy. Since late April, Salon’s David Masciotra has declared, “We must shame dumb Trump fans: The white working class are not victims,” and New York Magazine’s Jonathan Chait has written that Trump supporters “probably have some kind of mental shortcoming.” Countless writers have urged Democrats to disregard these voters on the basis of their attraction to Trump’s racial appeal, not an insignificant factor in his campaign. And given Democratic strength with minorities — an advantage only expected to increase with time — there’s a solid case that they don’t actually need these voters.

Are more Democrats and media elite like Melissa Harris-Perry, who’s at least nominally interested in building bridges? Or are they more like Trump opponents who, somewhat ironically, focus on building walls?

For his part, Bill Maher appears to be in the second category, sticking with the notion that many Trump-supporting Americans are simply dumb.

“Stupid people need to be told they’re stupid,” he said last week. “I’ve been saying it for years.”