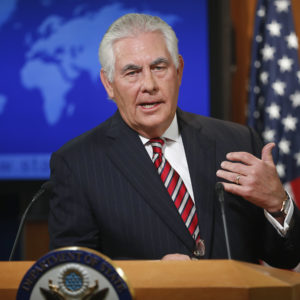 WASHINGTON — U.S. Secretary of State Rex Tillerson may be on his way out after displeasing President Trump with his repeated calls for a diplomatic solution to the North Korean crisis.

Tillerson’s desire to avoid the threat of a pre-emptive strike on the North’s nuclear and missile facilities is sharply at odds with Trump’s vow to inflict “fire and fury” on the North. Tillerson has said his views do not differ from those of the president, but the record shows he’s not interested in going along with a hawkish stance that would appear to nullify any chance of negotiations or dialogue with North Korea.

The conflict between Trump and Tillerson reflects the deep uncertainty among U.S. officials as to why North Korea’s leader Kim Jong-un wants to pursue his nuclear program and what to do about it. Trump has called Kim “little rocket man” but fears an attack on North Korea would trigger a response in which several million people could be killed in days.

In weighing the odds on whether North Korea would fire missiles on the South, Trump would prefer to follow the advice of CIA director Michael Pompeo rather than count on Tillerson to say what he would like to hear. The upshot is that, even if Trump never goes to war against North Korea, he would feel more comfortable with Pompeo as secretary of state. He could then be sure that he was getting the hardest-line advice possible.

The impending shakeup, if it actually happens, would bring the United States closer to a war that most Americans would prefer to avoid. Short of war, Trump’s only way to retaliate against North Korea for its latest test of a long-range intercontinental ballistic missile is to impose ever stiffer sanctions — and to try to get other countries not only to support a new set of sanctions but to break off diplomatic ties.

The bickering among high U.S. officials betrays the inherent weakness of the U.S. government in the face of the determined North Korean dictator. The fact is that none of America’s highest officials has come up with a convincing plan to get Kim Jong-un to agree to come to the table for talks while American politicians debate Trump’s tax plan and the headlines are full of stories of movie executives and political figures alike making unwelcome passes at women.

Adding to the distress of the Trump administration is that nobody seems to know how to counterattack North Korean missiles. The latest model, the Hwasong 15 was proven to be able to hit targets in the United States by soaring 2,800 miles above the Earth’s surface before coming down 590 miles from its launch site.

Why has the United States not been able to develop a counter-missile capable of shooting down whatever North Korea is firing? And what was the point of the controversial counter-missile battery known as THAAD — for Terminal High-Altitude Area Defense — if it could not be deployed to fire at North Korean missiles?

Those are difficult questions to which no one in the U.S. government or ruling establishment has definitive answers. All that officials can say is that shooting down an enemy missile is not only technically extremely difficult but also unbelievably costly. The United States and Japan, which shares Washington’s concerns, have yet to do anything substantive to fend off North Korean missiles.

Thus the impression is inescapable that Trump, while he talks tough, still has to believe that China’s President Xi Jinping will exercise the leverage needed to bring Kim Jong-un to his senses. Trump may have formed a warm relationship with Xi beginning with their meeting at his Mar-a-Lago, Florida, home in April, but he does not seem able to punch a dent in China’s desire to remain on good terms with the North for the sake of regional stability.

Amid all such questions, however, one figure appears to remain secure in his position. That’s Jim Mattis, the retired four-star Marine general, now secretary of defense. Mattis also has said that he would hope for a negotiated solution rather than place the lives of millions of Koreans in both North and South at risk.

Nonetheless, Mattis has been enthusiastic about deploying aircraft carriers with dozens of warplanes on their decks in waters around the Korean peninsula and also sending B1 bombers based at Andersen Air Base on Guam on intimidation flights across South Korea.

In both the naval and air exercises, the United States has been sure to coordinate closely with South Korea’s President Moon Jae-in. He has loudly denounced North Korea’s nuke-and-missile tests but opposes any suggestions for a pre-emptive strike on North Korea. But would the United States really consult closely with Moon if North Korea sent a missile hurtling in the direction of Guam — or toward the new U.S. headquarters base complex at Pyeongtaek south west of Seoul?

Americans and South Koreans alike hope they never have to answer the question.