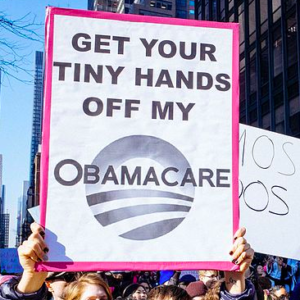 In June, President Trump asked the Supreme Court to strike down the Affordable Care Act, putting healthcare for more than 23 million Americans and protections for people with pre-existing conditions like diabetes and cancer at risk of termination.

He’s maintained this position despite being in the midst of a pandemic that he downplayed for political purposes and has taken the lives of 200,000 Americans.

Now, within hours of the tragic passing of Supreme Court Justice Ruth Bader Ginsburg, and in defiance of her last dying wish, Trump made clear that he will push to confirm a nominee “without delay” to a lifetime appointment to the court — hoping to secure the loyalty of another justice who will rubber stamp his lawsuit to destroy the ACA. That’s outrageous.

If Trump wants to put insurance companies back in charge of calling the shots on Americans’ healthcare and thrust the system into chaos, then he should give them a chance to have a say in such a consequential choice — not defy his 2016 position on confirming justices to the Supreme Court during an election, much less interrupt one that is already underway.

When Trump tried to strip these protections in 2017, the American people forced Congress to reject it, and then gave Trump a historic rebuke in the 2018 midterms.

Healthcare is a topic of deep, personal interest to voters.

Just this week, at a televised town hall in Philadelphia, Trump was asked by a voter with sarcoidosis — who prior to the ACA had been considered uninsurable because of her condition — how he would guarantee that she could remain insured and protected.

He made his typical grandiose and substance-less promises to protect people with pre-existing conditions before ABC’s George Stephanopoulos interjected to say that he’s suing to do the exact opposite.

As Stephanopoulos noted during the exchange, the ACA created a number of essential safeguards for people with pre-existing conditions, including: guaranteed issue (which bars insurers from denying coverage based on health status); community rating (which prevents insurers from charging people more based on their health history, gender, age or other factors); a ban on exclusions (which prevents insurers from including excluding coverage of a particular diagnosis, medication or body part); essential health benefits (which require insurers to cover basic benefits that they’d otherwise prefer not to like prescription drugs, mental healthcare, substance use disorder, maternity care, etc.); banning lifetime and annual coverage limits; and capping out-of-pocket costs.

As HealthAffairs’s Katie Keith points out, the proposals Republicans have released fall well short of guaranteeing that all people with pre-existing conditions can get and stay covered and afford the cost of care.

Weakening protections for people with pre-existing conditions matters because, without them, many families could face catastrophic costs that they cannot afford and our health system’s own pre-existing condition, systemic racial inequality, will only get worse. This is particularly critical in the middle of a pandemic that has already infected nearly 7 million people in the United States.

But it’s not just individuals suffering from COVID-19 who are at risk — the United States has also seen significant increases in mental health and substance use disorder cases during the pandemic. Disturbingly, this crisis has also underscored the rampant racial inequities in America’s healthcare system that the ACA is helping to address, including the higher rates of chronic conditions that put Black and Brown lives in danger.

Trump’s pleas with the public to trust him with their health fall on deaf ears.

He’s looked sick voters in their eyes and promised to “always” protect people with pre-existing conditions while suing to eliminate them. He’s derided and dismissed government scientists who are trying to help keep us safe during the pandemic. And he’s spent years promising to release a “full and complete” healthcare replacement plan “within weeks” while having no such plan.

Put simply: The American people can’t trust this president to nominate someone to the Supreme Court who will protect their healthcare because he’s spent years lying to them and playing political games with their lives.

They deserve the opportunity to make their voices heard at the ballot box and have their newly elected senators consider such an important lifetime appointment that will be involved in critical decisions about their healthcare.

Colin Seeberger is an associate director for media relations at the Center for American Progress Action Fund. He wrote this for InsideSources.com