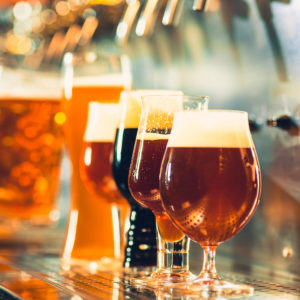 Trump’s Aluminum Tariffs Are Taxes on the Craft Beer Industry

One of the best things about life is coming home from work, cracking open a finely crafted beer and enjoying the rush of flavor. It’s nothing like a good beer that revitalizes the soul. The tranquility invited by the flavorful burst of a fruity sour or a crisp pilsner maybe threatened, though. Due to President Trump’s trade war among the world’s largest economies and his justification that America’s aluminum industry is in a state of disrepair due to so-called globalist forces, the craft beer industry is on the fritz.

Per the order of the administration’s Section 302 aluminum and steel tariffs, the manufacturing costs for American craft brewers are due to increase. The nature of trade tariffs, as theorized by several economists, relate to regressive market and income tax regimes. According to an analysis by American Enterprise Institute scholar and economist Mark J. Perry, Trump’s tariffs serve as a textbook example of a regressive border tax.

Additionally, with a citation in Perry’s analysis, economists Jason Furman, Katheryn Russ and Jay Shambaugh conclude the same findings. “It appears tariffs are imposed in a regressive manner — in part because expenditures on traded goods are a higher share of income and non-housing consumption,” Furman, Russ and Shambaugh concluded in a column published by the Centre for Economic Policy Research in 2017.

Applying these findings, tariffs add additional costs to consumer goods. Using the craft beer industry as an example, the consumers of this growing economic segment will pay more due to the levy on aluminum imports.

Aluminum cans serve as a cheaper means for brewers to distribute their products compared to traditional glass bottling. Given that the tariffs have been in effect for several months, the 10 percent levy on aluminum imports has already been felt by  brewers all over the country.

In consequence, the orders of the administration create an environment that kills bottom lines. Due to the increase in costs, brewers will have to pass on higher prices to consumers.

“The aluminum tariff is a tax on beer and will have severe consequences for brewers, distributors, bartenders and many others,” says economist John Dunham in a column published by the Beer Institute. “Most importantly, consumers who choose to drink beer will be people who ultimately bear the cost of this tax.”

The 10 percent increase in aluminum tariffs, from Dunham’s projections, indicate that the collective multi-billion-dollar economic generator will be forced to pay $347.7 million in increased costs. Some 20,000 people also could be at risk of losing their jobs. Smaller craft brewers could even shutter as such taxation destructs bottom lines.

Potential layoffs and increases in industry unemployment are the least of the problems. About 5.7 percent of overall manufacturers’ cost of beer distribution derive from aluminum canning and purchases. As a result, brewers will see “other costs rise due to higher prices for beverage cans,” Dunham projects. These costs would hit warehousing operations, distribution and shipping, insurance, administration, payroll, among others.

Beer Institute numbers also estimate there are thousands of breweries currently operating in the United States, employing more than 2.2 million people. The effects of tariffs are occurring in the real world. Both breweries and aluminum providers have announced cost increases, rising prices, shrinking workforces and long-term cost concerns.

The tariffs on imported aluminum “could end up walloping the bottom lines of craft brewers, who will probably pass along any extra costs to consumers,” columnist Tom Acitelli wrote recently in the Washington Post. Even as craft beer’s billion-dollar boom continues, long-term concerns have proliferated.

The tariffs serve as examples of self-destructive trade policy. But, the Trump administration remains adamant about auto-tariff policies, limited coordination with European partners, and a China-U.S. trade war.

By Jessica R. Towhey on May 17, 2021
It sounds like the setup to a bad joke: How many people does it take…
Read More
[IS] Opinions

By Gregory Clay on May 14, 2021
Too “woke” to survive. That’s a warning from well-known Democratic strategist James Carville. During a…
Read More