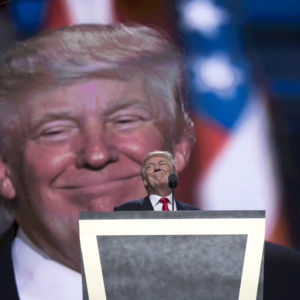 Trump’s Republican Convention Was a Huge Success — as Reality Television

The progressive pundit argued the then-presumptive Republican nominee was realizing “a new media moment,” wielding social media savvy and especially his mastery of reality television to propel his candidacy forward. He was achieving something no other candidate, Republican or Democrat, had been able to achieve.

“I think we thought he was going to leave the entertainment world and come over the wall into politics,” Jones said of the former host and executive producer of NBC’s “The Apprentice.” “He’s now pulled politics over into the world of entertainment. We’re now living in his reality TV show.”

That’s never been more true than it was this week, as the Republican National Convention unfolded in Cleveland. In his first appearance of the week, Trump walked on stage silhouetted by bright white lights as Queen’s “We Are the Champions” blared, complete with the quite Trumpian line, “No time for losers.” It was stagecraft right out of “The Apprentice” opening credits.

In general, the convention didn’t live up to Trump’s goal of a “showbiz feel.” There was no extra Hollywood flair discernible, and what actually transpired was four days full of technical, logistical and political blunders, some of them enormous.

Yet, indisputably, regardless of how it all affects Trump’s candidacy, the drama gave die-hard politics junkies exactly what a television executive may hope for: a jaw-dropping spectacle from which you can’t look away.

Chaos first came Monday in the form of a delegate revolt, when Trump-skeptical delegates from at least 10 states were denied a vote on rules binding them to the presumptive nominee. There were boos and shouts and storm-outs, while the mild-manned Sen. Mike Lee of Utah was front-and-center declaring things like, “This is surreal” and “I have no idea what’s going on right now.”

But none of this held a candle to Monday night, when Trump’s wife Melania delivered her speech. Though initially well received, the text soon proved to include passages almost identical to sections of Michelle Obama’s Democratic National Convention speech in 2008. This kicked off literally two days of controversy, as voices from Trump campaign and the RNC initially rejected — and vehemently, sometimes ludicrously pushed back against — plagiarizing accusations. Finally, a Trump organization speechwriter took responsibility for the mess, but that hardly eased the drama, especially considering what happened Wednesday.

The biggest moment of the convention other than Trump’s address was the speech by Texas Sen. Ted Cruz, who came in second in this year’s presidential primary. Instead of endorsing Trump, Cruz told Republicans to “vote your conscience” in November, giving his supporters permission to pick someone else for the White House. This was widely interpreted as consistent with Cruz’s conviction that Trump is unfit for office, but also politically strategic as the senator eyes another run in 2020. Adding to the drama, Trump walked out into the arena during Cruz’s speech, staring stone-faced at his former rival amid cheers and boos for his defiance.

For all the Cruz move suggested a fractured party at the convention, though, reports indicated that it may have unified more of the delegates behind Trump. They loved his speech, which is being covered elsewhere as deeply controversial for its strongman authoritarianism and dark depiction of an America under siege. Many Americans might agree with them, too, as some pollsters and journalists are already predicting a Trump bump in the polls.

Maybe it’s evidence of another media reality, which Trump the television programmer understands: even a series of bad episodes can be redeemed by a strong finale. It’s over to the American people for the ratings.