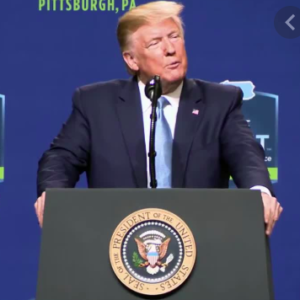 President Trump is taking a well-deserved victory lap on his “energy dominance” policy.

Speaking at the Shale Insight conference last week in Pittsburgh, Trump recounted a number of his energy policy accomplishments that have unleashed the American energy industry.

Not only is America energy independent for the first time in generations but we are on track to be the world’s largest exporter of oil. Both crude and natural gas production are hitting record highs year after year. Coal exports are at the highest they been since 2014.

—Withdrawing the United States from the “fraudulent, ineffective and one-sided Paris climate accord.”

—Opening up federally owned lands and offshore areas to energy exploration and production, including the Arctic National Wildlife Refuge, which Republicans have been trying to open up since at least President Reagan’s administration.

—Greenlighting vital pipeline projects such as the Keystone XL and Dakota Access.

Trump also promised to take on the war on energy being waged by New York and New England on fracking and pipelines.

Trump then contrasted his record of achievement with the stated plans of the major Democratic candidates.

Noting that despite the shale revolution saving the typical American household $2,500 in electric bill and gas pump savings, “many politicians have targeted the shale industry and your jobs for literally total destruction.”

“I don’t know is it on purpose, is it stupidity, is it through evil … virtually every leading Democrat has pledged to entirely eliminate fossil fuels, wiping out American production of oil, and coal, and natural gas, and, by the way, jobs,” the president said.

“These Democrat plans would obliterate millions of American jobs, devastating communities across Pennsylvania and bankrupting families all across our nation,” Trump warned.

“As long as I am your president none of that will come even close to happening,” he said to a standing ovation.

Trump then poked climate alarmist Democrats and the European Union for being “blinded by ideology.”

The president said the “radical ideologies” of Democrats in Congress would result in “mass layoffs,” “exploding energy prices” and would be a “gigantic gift to our foreign adversaries.”

“Some people think that’s why (our foreign adversaries) come out with all these (climate schemes),” Trump said.

“Our vision is pro-worker, pro-jobs pro-family, pro-energy and 100 percent pro-American,” he said, to a standing ovation.

Trump’s policies and visions are obviously radically different from his Democratic rivals as espoused in their individual climate plans and in the presidential debates and town halls.

While the president received standing ovations in Pittsburgh, Democratic positions on climate are such bad politics that, in the last debate, CNN and New York Times reporters didn’t dare ask a single question about climate.

No doubt they feared the candidates would just dig themselves deeper holes on the topic by raving about banning everything from fracking to plastic straws to cheeseburgers.

I can’t wait for next fall’s presidential debates.