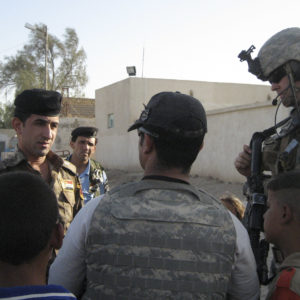 In this Monday, Aug. 29, 2011 photo, a U.S. Army captain from the 3rd Battalion, 8th Cavalry Regiment from Ford Hood, Texas, left, and a translator talk with an Iraqi Army soldier while delivering toys and water to residents in the village of Bani Hashem, Iraq. The soldiers, based out of COS Garry Owen in Maysan province, are part of efforts by the U.S. military to battle Shiite insurgents who have attacked American forces. (AP Photo/Rebecca Santana)
[IS] Opinions

On the Friday of his first week in office, President Donald Trump signed an executive order that barred Syrian refugees indefinitely and blocked entry into the U.S. for citizens from Iran, Iraq, Libya, Somalia, Sudan, Syria, and Yemen. The consequences reverberated immediately, with students, military translators, and others from children to the elderly being detained and interrogated upon their arrival in the United States of America.

Unprecedented protests erupted in airports nationwide by Saturday night. Thankfully, subsequent legal rulings and administration clarifications blunted the immediate chaos and at least saved legal U.S. residents, some of whom were caught up in the initial mess, from further embarrassment. Though these small steps forward in a long fight to come, President Trump’s executive order still stands—and I have a problem with that.

I served as a Coast Guard officer for ten years, including one year in the Arabian Gulf working with Iraqi sailors, marines, and translators who risked their lives on a daily basis to protect our crews. Many of our generation’s veterans owe them our lives, and we all owe them a sacred duty to follow through on our promise to bring them and their families to America. This executive order betrays that commitment while undermining American security at home and abroad.

After all, the U.S. has a rigorous process for vetting refugees that is tightly controlled by our intelligence community. Following an initial screening by the United Nations, the process is taken over by U.S. agencies like the FBI, Department of Homeland Security, and State Department. These agencies use overlapping and repetitive methods, including extensive interviews, health checks, biometric data analysis, and background checks, to dive into refugees’ backgrounds. Syrian refugees in particular must undergo additional steps of security clearing—the entire process can take an average of 18 to 24 months to complete.

To state it simply, the system is exhaustive, and it works—President Trump’s Muslim ban, on the other hand, definitively does not. The executive order uses September 11 as its rationale, but does not ban those who share a nationality with any of the hijackers. The list is something of a mystery; there have been zero deaths caused by immigrants from its seven countries since 1975, and it conveniently exempts several countries where the Trump family happens to conduct business, including Saudi Arabia, Turkey, and the United Arab Emirates.

Instead, this ban of desperate refugees and innocent immigrants is ultimately an empty gesture that will do nothing but embarrass the U.S. on the world stage and alienate many of the very people we rely upon as partners in the fight against ISIL. And to add fuel to the fire, these policies play directly into the hands of ISIL, who argue—like the Trump Administration, apparently—that Muslims cannot peacefully coexist in the West.

With our government failing, it falls to all of us to prove that argument false. We must offer those suffering abroad another choice—not radicalism or death, but safety, opportunity, and prosperity. We must offer those who would come to our country, whether just for a visit or to start a new life here, that which we have always offered immigrants from around the world: A chance to succeed on their merits and live up to our values.

The first step to doing so is insisting that President Trump rescind his cruel and ineffective executive order. By choosing this American way forward over fear and hate, we will make our nation stronger as we always have—through our founding values of freedom, equality, and inclusivity.

Brendan McKinnon is a J.D. candidate at Boston College Law School and a Defense Council Member at the Truman National Security Project. He previously served for ten years in the U.S. Coast Guard. Views expressed are his own.