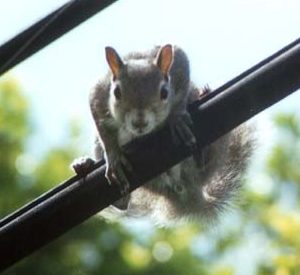 Last week, President Donald Trump released an executive order intended to protect the U.S. from electromagnetic pulse (EMP) attacks against the electric grid. But there is another threat to the grid, one that is far more low-tech and far more common, than a smuggled EMP device:

He may have been joking, but his math is dead on.  For a small mammal, squirrels cause a surprising amount of damage to the grid. In 2016 alone, utilities reported 3,456 outages caused by squirrels, cutting off power to more than 193,873 customers. These incidents are more common in the spring and fall but can happen throughout the year.

To try to stop the furry menaces and to keep equipment safe, utility companies employ a variety of deterrents like wheels, cages, and guards. Despite these efforts, squirrels are a constant operating hazard.

According to CyberSquirrel1, a website and Twitter feed that tracks “all unclassified Cyber Squirrel Operations that have been released to the public that we have been able to confirm,” squirrels have caused 1,254 outages since 2013. These include a fire department call for an “exploding squirrel” that caused a neighborhood in Massachusetts to lose power last month and 135 customers in New Hampshire who temporarily lost power because of a squirrel on March 12, 2019.

This isn’t exactly an unknown problem. Back in 2015, John C. Inglis of the National Security Agency warned, “I don’t think paralysis [of the electrical grid] is more likely by cyberattack than by natural disaster. And frankly, the number-one threat experienced to date by the US electrical grid is squirrels.”

Despite the long term damage caused by squirrels, they have yet to be the subject of a presidential executive order.  EMPs on the other hand, remain a theoretical threat to the electric grid, and yet have received far more attention.  Trump’s executive order was meant to “advance our national goal of increased resilience” across various infrastructure sectors, said then-DHS Secretary Kjersten Nielsen.

Meanwhile, the power industry is left to do its best to plead with rodents to please not chew the wires and to pick up the pieces afterward as best they can.

In a desperate (or tongue-in-cheek, at least) attempt to turn back the gray tide, the American Public Power Association published an “Open Letter to Squirrels” on January 21, 2019: National Squirrel Appreciation Day.

“Historically, the best those of us in the industry can say about squirrel appreciation is that we’d appreciate it if they stayed away,” they wrote. “But today, we’re willing to try a different tactic. Let’s work together to keep us all safe and the lights on…Think before you chew!”