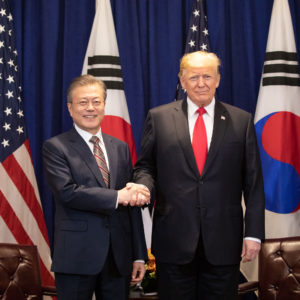 WASHINGTON — The United States is at a tipping point in terms of military power worldwide, nowhere more so than in Korea.

President Trump would love to withdraw a few thousand U.S. troops from South Korea if only to punish President Moon Jae-in for not acquiescing to U.S. demands for a vast increase in the costs of maintaining America’s 28,500 troops in the country. South Korea, however, is not the only U.S. ally to face huge cuts in U.S. military spending.

Trump may talk tough in the face of violent protests on the streets of American cities, but he’s ordering a massive retreat from alliances and commitments from Europe to the Middle East to Asia.

Probably the most unsettling aspect of the global American drawdown is that no one knows exactly what Trump is thinking, and he’s likely to make decisions without consulting allied leaders or even his advisers.

German Chancellor Angela Merkel had no clue Trump was ordering a massive pullout until he announced one day that Germany wasn’t spending enough of its own money on defense, was not meeting its commitment to NATO and anyway had much too big a trade surplus with the United States.

The prospect of pulling U.S. troops from South Korea is a little different.

Trump has been saying for ages that the South should pay $5 billion this year for the privilege of hosting the Americans, more than five times as much as last year. Obviously that figure was ridiculous, but negotiators still can’t narrow the gap of a few hundred million dollars between what the United States is asking and the South is willing to offer.

The U.S.-Korean impasse gets all the more complicated as Moon strives mightily to rekindle the spirit of dialog with North Korea after all the insults thrown at the South, notably the North’s self-destruction of a spacious modern structure built on its own soil at South Korean expense for purposes of lovey-dovey gabfests between South and North Koreans.

Whatever concessions Moon is willing to make to the North to get the talks going again, we can be pretty sure it will be quite a while before anyone suggests opening another liaison office.

Trump, however, would just love a fourth tryst with the North’s Kim Jong-un, and there’s no telling what he might promise or do to get it.

Considering how easily he got conned into canceling joint war games for U.S. and South Korean troops after his first love-in with Kim in Singapore more than two years ago, we have to be ready for another surprise in the run-up to the U.S. presidential election in November.

For Trump, what counts is not the U.S. defense of South Korea but the number of votes he might win or lose by ordering a drawdown in U.S. strength in Korea as a prelude to one more chance at hugging the North Korean potentate for all the world to see.

All of which inspires distinctly mixed feelings in Seoul. Sure, President Moon is a liberal, and he’s named a slew of old-time leftists to important positions, but then a lot of Koreans, including members of his own party, really feel uneasy about the U.S. reducing its strength in Korea and the region.

It’s fine for Moon to do all he can to reopen dialog, and talk about trade and cultural exchanges and family visits too, but by now nobody in his right mind can count on the North honoring any agreement.

As for the North’s making a show of doing away with its nuclear and missile program, forget it. The best anyone can hope for is that Kim doesn’t order a test of a long-range missile capable of carrying a warhead to the United States. We can thank the spread of COVID-19 for putting the damper on that plan, at least for now, but it’s unlikely Kim has abandoned the idea.

Trump for his part isn’t giving up on lowering the U.S. profile in South Korea and the region by another pullout. Defense Secretary Mark Esper is coming up with elaborate plans and rationales for rotating troops in and out, giving an appearance of readiness.

Nobody’s fooled except American voters, fixated on the twin menaces of mayhem in their own cities and the spread of the coronavirus that Trump has failed to comprehend while compromising historic alliances.