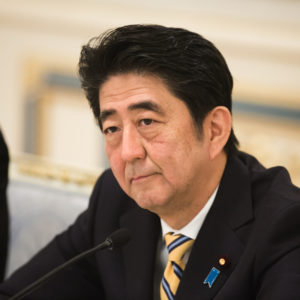 Posted to Politics May 25, 2016 by Carter Dougherty

TOKYO – There is probably no country in the world that follows American news more closely than Japan, and it’s no wonder. Mike Mansfield, the Republican Senate majority leader in the 1960s and longtime Asia wise man called it “the most important bilateral relationship in the world, bar none.” The wider Japanese public, not only the government, treats it as such.

So, if ever there was going to be a country where an American presidential candidate can make waves, it would be Japan. And Donald Trump has managed to do that on what might be the most sensitive subject in all of Japan’s long history: nuclear weapons. And he did it in advance of President Barack Obama’s visit this week to Hiroshima, the city where the United States dropped the first atomic bomb.

Put simply, when a presumptive presidential nominee for one of the two major American political parties suggests, in all apparent seriousness, that Japan should acquire nuclear weapons – as Trump did recently – it is understood as a serious force buffeting U.S. foreign policy. Following American politics closely, and taking their alliance with the United States seriously, the Japanese can’t afford to simply dismiss the talk as campaign chatter.

“Anything he mentions is reported. It’s eye-catching, I admit,” said Masato Otaka, the deputy spokesman at Japan’s Foreign Ministry and, until early this year a diplomat in the Japanese Embassy in Washington.

In April, Trump mused that a nuclear-armed Japan would help deter North Korea’s strongman, Kim Jong-Un. “If Japan had that nuclear threat, I’m not sure that would be a bad thing for us,” Trump said. He added that American “weakness” — the United States is treaty-bound to protect Japan — probably made Japan’s move to atomic weapons inevitable.

Trump’s remarks come at a sensitive time for Japan, as the country digests changes to its military posture that the government of Prime Minister Shinzo Abe pushed through last year.

Japan renounced its sovereign right to wage offensive war in the constitution it adopted after the Second World War. Pacificism runs deep in the country’s politics. Many Japanese view the destruction at Hiroshima as proof positive that a military buildup by their country can only end in ruin. At the same time, the alliance with the United States is central to Japan’s security, and it provides non-military support, like paying for employees at U.S. bases in Japan.

Since then, during the Cold War and now with the rise of China, it has periodically taken baby steps to heighten the military engagement of Japan’s Self-Defense Forces – yes, that’s their name – within the bounds of the constitutional stricture. Last year’s change permits Japan to help defend the United States, if it, but not Japan faced attack. What it did not do, and what is unimaginable in Japan, is to allow the country to acquire nuclear weapons.

Yuriko Koike, a member of Japan’s parliament, who some believe could someday be its first female prime minister, called Trump’s suggestion that a nuclear-armed Japan could help deter North Korean dictator Kim Jong-Un, “a striking example of how his muddled jingoism can unsettle political discourse.” Put simply, it fortified suspicions, which have no real basis in the known facts, that Abe has a big hidden agenda that involves giving Japan the power to do what the United States did in Hiroshima.

“Trump’s inflammatory rhetoric has helped to take these fears to the next level, with some opponents of Abe’s defense reforms detecting, they believe, the germ of some secret conspiracy with the US to turn Japan into a nuclear-weapon state,” Koike wrote in a recent essay. “[G]iven the need to reassure the Japanese public that Abe’s reforms are truly what he says they are — that is, modest changes that will allow Japan to deepen its alliance ties — Trump’s intervention is the height of irresponsibility.”

Koike, 63, is an interesting character because she belongs to the hawkish wing of Abe’s party, which would like to see Japan become more assertive in defending its national interests, particularly vis-à-vis China. She is the granddaughter of a Japanese man who lived for a time in Seattle, and developed a feel for what he viewed as American prejudice toward Asian-Americans. But that doesn’t diminish Koike’s affinity for the United States. “If he’d stayed there, I would have been born in the United States and would be running against Hillary,” she said in an interview, only half-jokingly.

But that doesn’t mean Koike has any sympathy for Trump’s position.

Abe’s changes went through following a searing public debate that included a months-long parliamentary session, massive demonstrations and, two years ago, a self-immolation by a Japanese protester in downtown. The political task before his supporters, including Koike, is to get their arms around the spirits that Trump unleashed with his glib suggestion that Japan go nuclear. “Japan does have the technical capacity to have a nuclear weapon,” Koike said, acknowledging what’s obvious to anyone. “But there is no political will to have a nuclear weapon.”

More broadly, if Trump were to one day sit in the Oval Office, he would likely find that the United States and Japan have largely settled the kind of issues that he suddenly wants to reopen. The relationship was born of the American occupation of Japan after World War Two and the Cold War alliance that deterred the Soviet Union in the Pacific. Tokyo’s wartime atrocities meant that other Asian countries would never be comfortable with a well-armed Japan, so the United States linked arms with Tokyo and by the 1980s had found a posture that did the job without inflaming the neighbors.

Trump would shred the basis of the bilateral relationship that Mansfield, a Republican, so revered for so many years if he pushed Japan in the direction of nukes, Koike intimated. “It seems,” Koike said of Trump, “that he forgot to wind his analog clock since the 1980s.”