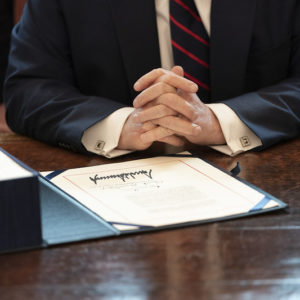 Trump’s Presidential Records Are at Risk

Posted to Politics December 03, 2020 by Anne Weismann and Lisa Rosenberg

With the clock ticking toward a Joe Biden administration in January, the country faces a significant risk that President Trump and his White House will destroy some of the records of his time in office, motivated at least in part by a desire to avoid any accountability for his actions.

In the wake of Watergate, Congress made it clear through legislation that presidents’ records, which provide a historical account of their administrations, belong to the public and must be preserved.

Unfortunately, given this administration’s propensity for secrecy and disregard for the law — and Biden’s election win — we can anticipate that the president and his staff will light a metaphorical bonfire in the Rose Garden, using the transition period to destroy records the president would rather the public not see.

The Presidential Records Act (PRA) requires the president and his staff, with the assistance of the National Archives and Records Administration (NARA), preserve records so that Americans and future administrations have documentation and context for the president’s actions and decisions.

Since taking office, President Trump has shown contempt for the records law, tearing up documents, which his staff had to piece back together, and deleting his Twitter posts even though they are deemed to be official records.

And it’s not just the president. Secretary of State Mike Pompeo refused to recover and preserve records from the president’s meeting with Russia’s Vladimir Putin.

The administration’s past recordkeeping practices and continuing efforts to block transparency and accountability are a real threat to the public’s right to know and future efforts to hold them accountable.

NARA has a critical role to play, as well. As the eventual custodian of the Trump presidency’s records, NARA should be guiding the White House and ensuring its full compliance with the PRA.

To date, however, NARA has been silent about its ongoing and planned efforts to assess the volume of the records for preservation and its preparations to receive and store them.

If there are problems, NARA must alert Congress and the public to maximize their ability to intervene to preserve the fullest possible record.

Despite Trump’s many self-accolades as the most transparent and patriotic of  presidents, the fact is his actions and those of his administration at various stages have critically undermined governmental transparency and accountability.

This White House has a chance to recover some lost ground by preserving presidential records rather than unlawfully altering or destroying them.

Whether the president is proud of his record or ashamed of it, he owes it to the American people to preserve evidence of it so they may judge for themselves.

Anne Weismann is a Freedom of Information Act litigator and former chief FOIA counsel for Citizens for Responsibility and Ethics in Washington. Lisa Rosenberg is executive director of Open The Government, a nonpartisan transparency and accountability organization. They wrote this for InsideSources.com.