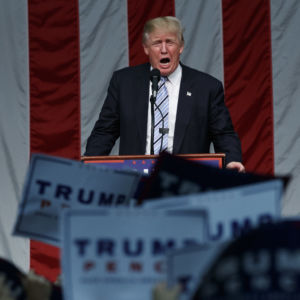 “How did you lose General Electric?,” Donald Trump shouts, gesturing with his arms to emphasize every word.

The Republican presidential nominee is firing up a crowd that’s already quite hot — 5,000 people dripping with sweat inside a Sacred Heart University arena in Fairfield, Connecticut, this past Saturday.

Trump’s hot, too. With no AC, he jokes it’s 190 degrees. And his suit? More like a sweatsuit, let me tell you.

“How did you lose General Electric?,” he demands again, referring to the company that moved from its 42-year-old headquarters in Fairfield to Boston in January, seeking a business climate that “shares our aspirations.”

Trump knows the culprit, by the way. It’s not like these poor people have to guess. “Bad governor,” he tells them. “You got a bad governor. Any governor that would lose General Electric hasn’t done his job.”

The attacks on Democratic Gov. Dannel Malloy are the most surreal part of the rally. The first swipe is clearly legitimate — GE did leave on the governor’s watch, and he acknowledged the move stung the state. But soon Trump has blown past this, mocking something totally juvenile — Malloy’s admittedly unusual first name.

At this point, you may be wondering what’s going on here — why the GOP standard-bearer, 86 days to the general election, is hanging out in the heavily Democratic Nutmeg State instead of, say, swing states like Pennsylvania or Ohio. It’s an especially good question since he’s behind in those places, to say nothing of some red states where he isn’t yet a lock.

There’s clearly money to be had in this state; a fundraiser for Democratic nominee Hillary Clinton is scheduled Monday in affluent Greenwich, where Trump used to live. Yet Trump holds only his rally over the weekend, at which he professes to be “making a big move for the state of Connecticut, just so you understand.”

His goal, however unrealistic, is appealing to Democrats and independents in his former home state, which borders New York and has many residents who commute to work in New York City. Connecticut is in rough shape, after all. Major economic distress. Record negativity about “the way things are going.” Trump carries a piece of paper with some statistics written down.

Throughout his speech, he rails against lost jobs and high taxes — “If they get the taxes down, I’ll come back immediately” — but the villain is clearly Malloy, now the second most unpopular governor in America.

“Dannel!” he exclaims sporadically, snarling the name into the microphone. “Daaannel!”

To put it bluntly, no serious people are predicting a Trump victory in Connecticut. No Republican has won the state’s presidential contest since 1988, and the respected FiveThirtyEight forecasters put Clinton’s chance of prevailing at 94 percent.

Democrats, for their part, like those odds. In an email, state party spokesman Leigh Appleby doesn’t mince words, writing that “Republicans claiming Donald Trump can win Connecticut are delusional.”

Kevin Rennie also uses the d-word on this subject. A conservative political columnist for the Hartford Courant and InsideSources, he says in an interview that there’s no chance — none — of Trump pulling an upset: “People in Connecticut recognize what our problems are, but they certainly don’t associate him with the solutions.”

“We already have one surly bully in Dan Malloy,” Rennie adds. “We don’t need another one.”

The biggest question — one asked with increasing frequency by political professionals across the country — is what Trump himself is thinking with his little blue-state foray.

University of Connecticut political science professor Paul Herrnson says “coming here was a strategic move because it attracted a lot of media attention” in the New York market, but then, Trump typically attracts a ton of press wherever he goes.

Political consultant Liz Kurantowicz, a former chief of staff for the Connecticut Republican Party, has a more persuasive theory. She says Trump might simply see the state as his territory — a familiar, nearby place in a region he knows and loves. She recalls how former New York City mayor Rudy Giuliani, a vocal Trump surrogate, felt this way during his own ill-fated Republican run for the White House in 2008. He thought of it almost like home.

When it comes to Trump, though, Kurantowicz says it’s not surprising “an unconventional candidate would look at unconventional opportunities.” She sidesteps the question of whether she’d have advised him to rally in Connecticut, but suggests his campaign might see Malloy as useful political foil.

At least one Connecticut politics expert who actually attended the Sacred Heart speech comes away impressed. Gary Rose, chair of the university’s Department of Government, Politics and Global Studies, says he’s struck by the candidate’s facility with local issues.

“He’s intimately familiar with our state,” Rose says of Trump. “It obviously is a state that’s most likely going for Hillary, but I’m confident enough to say there could be an upset. I’d really be amazed, but something’s going on around here.”

Something definitely is — even if it’s just a major party candidate for president who keeps screaming the governor’s name in a big gymnasium.