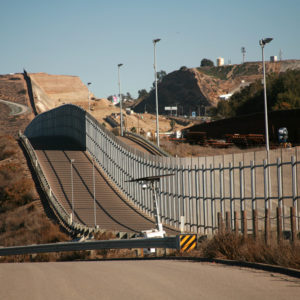 San Ysidro, California - 11/26/2018: The secured border fence and road for United States border patrol vehicles on the US - Mexico international border in California
[IS] Opinions

Trump’s Right About Wheels, Less So About Walls

President Trump has sought to conflate walls with wheels. In a call-in to Fox and in several tweets, he declared both as having been around for a long a time and that they’ve proven themselves.

In a tweet last month, he said, “Democrats are trying to belittle the concept of a WALL, calling it old fashioned. The fact is there is nothing else that will work, and that has been true for thousands of years. It’s like the wheel, there is nothing better. I know tech better than anyone. …”

I’m with Trump on wheels. I’m a fan of wheels. They work, walls less so; walls are heavily invested in failure, as a psychiatrist might say.

You can get by without wheels, but you’d be ill-advised. The Incas built a great civilization without the round things. Amazing. Don’t try it. Likewise Great Zimbabwe, the center of a Southern African civilization in medieval times, was also wheel-free and has some beautiful walls, all built without grout. The stones just sit there, collaborating if you will. This construction isn’t recommended where stone-throwing is prevalent. You’ll get your wall thrown in your face.

When it comes to wheels, we are so deep into the wheel culture that one’s head goes round and round. The greatest invention of the last few years was, without doubt, adding wheels to luggage. What took so long? Well, the wheels do have super nylon bearings and are better than the old wheels, but even so …

There’s a downside: Bellhops, porters and others have been, well, wheeled away. Sort of like grain-grinders before the mill wheel sent them back to wherever old mortar and pestle people go —  probably into building walls.

There are forever new uses for wheels, like giant flywheels which can store untold amounts of energy. Nifty eh? These are the solution to the “alternatives,” like wind and solar, making too much electricity when everyone is at work or asleep. Downside: this wheel, with as much energy as hundreds of locomotives, is also an inadvertent weapon of mass destruction. If it gets loose and goes wandering through your town, wheelie mayhem.

Walls are really without equal for houses and buildings. After that, their history has been troubled. Emperor Hadrian, something of an architect, built a wall in order to keep undesirables out of Rome’s Britannica province. It stretched from sea to sea across northern England, only 174 miles. Yes, he had the army build it along with a ditch. They put it up — using stone, earth and wood — in six years. Its greatest use has been as a tourist attraction.

Ditto the wall around China, all 5,500 miles of it. A lot of China’s enemies, like the Mongols, Japanese and British, found it easy to get over or to come by sea. It, too, is a big tourist attraction nowadays. The story of walls is they pay for themselves, if you can wait a couple of thousand years.

As for the purpose of keeping people in or out, the Berlin Wall must get a prize. It was a great concrete-and-barbed-wire job, but the thing that made it work were the shoot-to-kill guards. No rushing it a second or third time.

In Cyprus, Belfast and Israel walls have been erected to keep people apart. Trump wants keep people out and apart, but he has no idea how this will stimulate people to get around, over, under or just to find new access.

Most walls that have stood the test of time have been built of masonry because it lasts. Steel has a short life: It rusts and requires constant expensive painting or maintenance.

All references to the Trump wall suggest that it sticks up, maybe 30 feet. He might investigate a ha-ha wall. They are the wall equivalent infinity pools. The ground looks level and verdant, but a deep ditch or trench faces an impregnable vertical wall below the surface level. These were favored around Australian lunatic asylums in the 19th century. When the poor inmates tried to make a break they were, in fact, walled in — hence, the ha-ha. Maybe it’s what we need on the southern border, inconspicuous and effective.